Home
>
Analysis
>
A Busy Week For The Reds

Ordinarily having to play a match on a Saturday then another on a Tuesday would qualify as a busy week all on its own for most football clubs, but Liverpool right now aren’t like most football clubs. The Reds defeated Watford on Saturday before flying out to Qatar for the semi-final of the Club World Cup, yet also leaving behind a youth team to play Aston Villa in the quarter-finals of the League Cup. On top of all of that Michael Edwards and his team was also busy working behind the scenes to secure the signature of Takumi Minamino from Red Bull Salzburg. Little wonder, then, that Liverpool supporters feel so spoilt at the moment. Whilst things didn’t go as we would have hoped for Neil Critchley and his youthful squad as they took on Aston Villa, the mini-Reds left the Midlands with their heads held high after dominating the match in all areas except for the scoreline.

It was a disappointing result, but it was great to see so many young players perform so well on the big stage. There can be no doubt now that Harvey Elliott has a bright future in front of him, whilst the likes of Herbie Kane and Pedro Chirivella will make it in the Premier League even if not necessarily at Anfield. In a perfect world the nonsensical situation that the club was put in will make the Premier League, Football Association and English Football League sit up and think about how they can handle things differently moving forward that means clubs are rewarded for success rather than punished, but I somehow can’t see that happening. In my opinion Jürgen Klopp was right to prioritise the Club World Cup over the League Cup and now we can head into Saturday’s final knowing that a win there will justify the club’s decision to do just that. The tabloids might not like it, but it’s the bigger competition.

Why The Club World Cup Matters The Most

Liverpool have never won the Club World Cup, nor its forerunner the Intercontinental Cup. That might not seem like the most important thing in the world, especially considering it’s not exactly a competition that most people will bother watching unless their club is actually in it. Yet when you note that the likes of Real Madrid, Manchester United, Barcelona and Bayern Munich are able to add the trophy to their cabinets, it’s a poor showing from England’s most successful club in European competition. There’s also the fact that the prize money for this year is in excess of £3 million, which compares favourably to the £100,000 plus that the winners of the League Cup will receive. Ok, so £3 million seems small potatoes in the day and age of massive television deals, but when you consider that it pretty much pays Takumi Minamino’s wages for a few years it doesn’t seem so cheap after all.

Liverpool must be the only club who are been asked to justify why they are playing in the World Club Championship. Its a honour for Liverpool and the Premier league to have a representative there but support has been zero and negative.

The League Cup is a competition that Liverpool have long had a good relationship with, even today boasting the record for wins in the competition. I do understand why some supporters think it’s an important trophy that the Reds should have gone all out to win. Yet the reality is that the two-legged nature of the semi-final stage of the competition would have given us a fixture overload at a time of the year when Jürgen Klopp has struggled to get the most out of his players in the past. When you consider that we’ll play the same number of games to potentially become world champions as we would need to just to reach the final of the League Cup, Klopp’s decision making becomes a little clearer. There’s also the commercial reality that sending our best players to the Club World Cup will mean more on a global scale than winning the League Cup and, whether we like it or not, such things matter in modern football.

Minamino Could Be The Difference Maker

I’ll confess that my knowledge of Takumi Minamino is limited to the two games that I saw him play for Red Bull Salzburg against Liverpool in the Champions League as well as the few articles that I’ve read about him recently. What I will say, though, is that when I saw him in our two European encounters I immediately thought that he’d be an excellent Jürgen Klopp player. Clever, willing to press and quick to move in between the lines, he reminded me of Roberto Firmino-lite, such was what he offered to Salzburg. Of course, I also thought that Danny Ings was the perfect Klopp player so what I think isn’t always all that useful. That being said, what he offers is more than just about whether he’ll fit into the team. Most of us have been crying out for another attacking player to be added to the squad for some time, given the need to allow one of Sadio Mané, Mo Salah and Firmino the chance to have a rest every now and then.

I’ve heard and read a lot of criticism of Mo over the last couple of months. You know, the period where he was playing with one ankle and still managed to score belters like the goal against City. Absolute tosh. The man is one of the greatest players this club has ever seen.

Rhian Brewster was supposed to be that player, if you believed the talking heads in the summer, but it’s clear that he hasn’t kicked on in the way that Klopp and his team will have been hoping. Elliott is a phenomenal talent but he’s still only sixteen. Both Xherdan Shaqiri and Alex Oxlade-Chamberlain have plenty to offer Klopp moving forward, but neither of them work as part of a front three. Divock Origi, for all of his cult-status nature, only performs at the top level in fits and starts. None of them are of the required level to allow any of the front three to be taken out of the firing line for a prolonged period of time, which becomes a problem when one of them looks tired as we’ve seen with Firmino recently. If Minamino is even half as talented as he looked against us then we’ve signed a player who can readily replace any of our attackers, which will allow us to keep firing in the Premier League and Champions League this season. 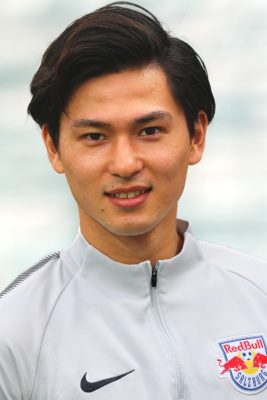 That, if we’re all being honest, could be the absolute different maker in our pursuit of glory.
Tweet Pin It