Home
>
Analysis
>
Are There Alternatives To Our Transfer Targets?

Every Monday during the transfer window I’ve been writing and posting a round up of all of the players that Liverpool have been linked with. Unlike in previous windows, there aren’t actually that many names bouncing around. Of course you can find plenty if you want to look at the less reputable sources, but the general consensus is that our targets have been narrowed down to a central defender and a midfielder; namely Virgil van Dijk and Naby Keita. For some sections of the Liverpool fanbase this is being seen, predictably, as a cause for panic. But is that fair?

Liverpool need to get their finger out with some transfers. Massive window for the club. #LFC #liverpoolfc #TransferNews #TransferWindow

We’ve already secured the services of Mohamed Salah, an exciting player in his own right but also the ‘replacement for Mané’ many people were crying out for. The opportunistic purchase of Dominic Solanke was an intelligent one, giving Klopp an option should Sturridge’s injury problems persist or Divock Origi struggle to find the form that made him look such an exciting prospect back in the 2015-2016 season. Yet for some this transfer window will be a ‘failure’ if we don’t either bring in both of our targets or else sign some alternatives. I’m not entirely sure that’s fair, if for no other reason than Jürgen Klopp may well not have any alternatives on his radar…

Are There Alternatives To van Dijk?

Here’s the thing about Jürgen Klopp that some Liverpool supporters may not quite have got their head around: he doesn’t really buy into the idea of incremental changes. Football fans who have a longer memory than simply thinking back to Brendan Rodgers will remember that Rafa Benitez was never afraid to go out and buy a player he’d rate at 7.5 to replace one he thought was a 7. For proof of this look at the move from Josemi to Jan Kromkamp to Alvaro Arbeloa to Glen Johnson, all in the space of five years. Meanwhile have a look at who Klopp has used instead of Nathaniel Clyne. It’s essentially been Clyne or Trent Alexander-Arnold and there’s been no real desire to search for a better alternative.

Those close to #LFC say #Klopp isn’t always interested in alternatives if he doesn’t get his primary targets. #Keita #VvD (@MiguelDelaney)

Despite the deepest desires of some Reds, Klopp is unlikely to just head out and splurge £70 million on a defender if we can’t persuade Southampton to part with Virgil van Dijk. Now I should say that this isn’t a policy I necessarily agree with. I think we’re in need of defensive improvements, but I’m not sure that the manager wants to just bring any old centre-back into this team and hope for the best. For Klopp it isn’t just about having an extra body but having the right body. Why? Because there are weaknesses in this defence that desperately need to be mitigated, but they are very specific weaknesses that only a certain breed of player could help to sort.

I personally am on record as being against the idea of keeping hold of Simon Mignolet this summer. Yes, he absolutely improved at the tail end of last season. When all is said and done, though, we’re talking about eight games. He was still throwing in genuinely terrible performances against Hull as late in the season as February, don’t forget. Even if you thought he was a man transformed for the entirety of the campaign – and there are plenty of people who would agree with you – his weaknesses are a big part of the problem with our defence and the chief amongst them is communication.

Poor communication between Mignolet and Klavan. Mignolet easily catches Crouch’s header but Klavan clears it and gives them back the ball.

Now I honestly have no idea how good van Dijk’s communication is, I haven’t seen him play enough to know. The fact that he was made Southampton captain not long after arriving at the club is suggestive of the notion that it’s excellent, however, and I think that’s one of the big reasons why the manager wants to bring him in. There is something reminiscent of Rio Ferdinand’s play in the Dutchman’s style and that’s not an easily replicated trait. If we bring him in then he likely becomes our first-choice centre-back along with Joel Matip, with Lovren dropping to third and probably Joe Gomez becoming fourth-choice. That would make Ragnar Klavan our fifth-choice centre-back and that seems about right for a player of his ability. 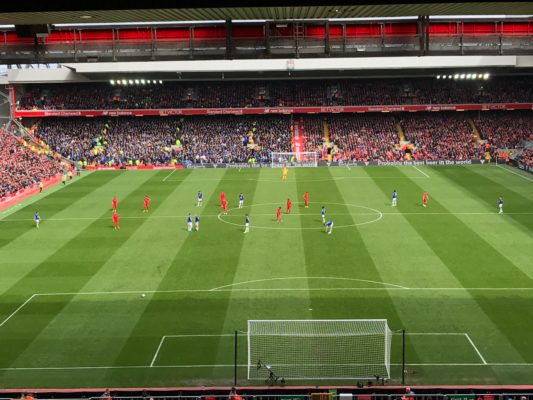 That can only happen because he’s a significantly better defender than we’ve already got on our books. If we do what most supporters want and just bring in a defender – any defender – then all you do is water down our defensive options with a mediocre player who is about the same level as Klavan and Gomez, except for the fact that Gomez is young. How many defenders are available right now that would genuinely improve us in the same way that van Dijk would? Don’t forget that United, City and Chelsea were all after him but he’s keen to work with Klopp. This isn’t us settling for someone that no one else is interested in. As I say, I’m not sure not bringing in anyone is an option. But I do think that Klopp isn’t keen to take his eyes off his primary defensive target until it’s clear we’re absolutely not going to sign him.

Are There Alternatives To Keita?

I think the situation with Naby Keita is similar, though for different reasons. I think part of the problem with trying to find an alternative target to the RB Leipzig man is that there aren’t any. We’re talking here about a 22-year-old box-to-box midfielder who essentially does the work of two players. The reason we’re interested in him is that he’s unique, so you don’t replace him with just one different player. The comparison to Ngolo Kanté is lazy and essentially based on the fact that they’re both black midfielders, but it’s certainly true that the two of them cover an awful lot of ground during a football match. It’s not something that’s replicated without any issue.

I think Keita is a brilliant player and the fact that he’s so young means that he’s only likely to get better. I’m very excited about the prospect of us signing him and him working with Klopp, but I’m also suspicious that we’re not after him because we desperately want another midfielder. I think it’s more about him being an excellent player who may be available so, much like with Solanke, you grab them whilst you can. Now I know nothing about Liverpool’s transfer plans from an official point of view, but I don’t believe Klopp desperately wants another body. I think he wants Keita because of everything he can provide for the next five years, not the next five months. I might be wrong, but that’s my instinct.

It’s an instinct borne from experience and from looking at our squad. Right now, if you assume that Roberto Firmino, Sadio Mané and Mohamed Salah are all going to be used more as forwards than midfielders, the manager’s options look like this when it comes to the middle of the park:

Given that Klopp has also been using Ben Woodburn in what you might call the ‘Coutinho role’ during pre-season and has also not been afraid to turn to the likes of Ryan Kent and Ovie Ejaira at times, it’s not exactly an area of the squad that desperately needs strengthening. Add to that the fact that James Milner could move into the middle if needed (please never let that happen, Jürgen) and both Salah and Mané are willing and able to play more centrally and you can see why I don’t think adding in another midfielder is key to Klopp’s transfer plans. Should Ralf Rangnick and the Leipzig board continue to bunker down, racially tinged comment and all, I don’t think we’ll look elsewhere. It would certainly explain why there aren’t more names being bandied about. With van Dijk it’s about a lack of players at a similar level, with Keita it’s because few players do what he can do.

Is There A Transfer Plan B?

The natural thing to ask, then, is whether or not there is a Plan B when it comes to our transfer work this summer. I actually think that there is, but I don’t think it’s got anything to do with players in a similar position. My instinct is that we might just go and splurge the cash on a brilliant player, irrespective of where they play. It’s why I think we heard so many noises about the club ‘wanting to be in the conversation’ over Kylian Mbappe, for example. I couldn’t see FSG, or Klopp for that matter, spending over £100 million on a teenager as well as Keita and VvD, but I absolutely could see us splashing that sort of money if we missed out on both of them.

Seen city are apparently bidding on mbappe ! When are Liverpool joining the conversation then ?

It’s unfortunate for the owners – and Mecca for the #FSGOUT brigade – that the summer they feel confident enough with the man in the hot-seat to let him go out and spend mega money is also the summer that selling clubs have decided to play hardball. Those that like to take a negative approach to football and this ownership in particular might want to pretend it’s just a matter of throwing money at the problem, but both Saints and RBL have more than enough money to mean that they can tell Liverpool their players aren’t for sale and no amount of cash will change that fact. It is, in my opinion, now down to the players to force their way out of each club and I still believe that that will happen.