Home
>
Analysis
>
Vindication For Scapegoats In A Superb Performance

I honestly didn’t know what to expect going into yesterday’s game. I wasn’t nervous, but I wasn’t confident either. I’d predicted a 3-1 win when I did The Anfield Wrap’s Friday Show, but speaking to Chris Hewitt before the game made me question my confidence. I felt that if Liverpool were at their best then we’d have too much for Man City, given the form of both teams prior to kick-off. Yet you can never rule out Pep Guardiola’s side, considering they’ve been good enough to rack up one hundred and ninety-eight points across the past two seasons. They’re a brilliant football team that knows how to take the fight to sides that want to go toe-to-toe with them, which was demonstrated by the fact that they continued fighting right up until the last moment despite the fact that it was as good as a lost cause as you can get in the top-flight.

My biggest fear this season is that it could be do or die for the Reds. Teams have won three Premier League titles on the bounce, but they never had to do it operating at this level. When Manchester United won the treble in 1999 they lifted the title with seventy-nine points. When they won their third in a row in 2001 they only had to have one point more than that. Over the past two seasons City dropped just thirty points, so the fact that they’ve already dropped eleven suggests that going at a rate of nearly one hundred points a season is a difficult level to maintain. Whilst we’d all love to think that we’ll never lose another game, there’s a chance that we have a similar drop-off next season if we end this campaign in the hundred point area. To put it another way, win it now or we might not win it any time soon. Today’s all about celebrating though, with some players deserving to do that the most.

When Will People Accept This Midfield’s Ability?

It’s become a common refrain now as soon as Naby Keita or Alex Oxlade-Chamberlain have a good game that someone will say that they have to start our next game, regardless of opposition or what tactics Jürgen Klopp might be planning to employ against them. I understand it, of course. We all want the Reds to be as exciting as possible and both Jordan Henderson and Gini Wijnaldum have had moments of poor form at some point or another during the season so far. Yet there’s a real ‘FIFA manager’ feel to the people demanding that Klopp abandons his favoured midfield for the big games in order to quench their thirst for action. The majority of people are far too locked into their opinions to ever admit that they might just have been wrong, but if ever a game was going to force people to re-think their take on the midfield then surely it was yesterday’s.

A word on ‘that’ midfield.

Some seem desperate to play others, but once again at home in a massive game, they were all magnificent and justified their place.

Jordan Henderson was knackered by the time that he was subbed off, but if you want proof of how influential he is to this team then all you need to do is have a look at how we controlled the game for the twenty before he went off and then how we completed ceded that control when he was no longer there. There’s an extent to which that’s because others were tiring and I maintain that James Milner is never the right sub for those games because he simply can’t get up to the pace that the match is being played at, but the club captain’s influence should not be underestimated. He runs and runs and runs, harrying and closing down the opposition and when he gets a chance like he did for the third he can deliver a killer ball . He’s been out of form for a few games this season, but there’s a reason that the mananger turns to him and Gini when the biggest matches roll around and yesterday was their vindication.

Dejan Lovren has brain farts. There’s no point pretending otherwise because there’s a wealth of evidence that proves it. I have zero problem with people saying that he loses concentration sometimes and makes mistakes because that’s true. It’s the idea that he’s a terrible defender that I really have a problem with. I wrote recently that I think he’d get into any defence in the Premier League right now, with the possible exception of Leicester City, and I stand by that opinion. Manchester City could have benefited from his presence in their backline yesterday, for example. Raheem Sterling had arguably his best performance at Anfield since leaving the club for the Cityzens, yet he couldn’t do much to cause us damage because of how well the defence as a whole controlled him. That includes Degsy, who was brilliant throughout.

Yes, Sergio Agüero has a mental block about Anfield and Sterling doesn’t like coming back, but let’s not pretend that Manchester City’s frontline isn’t one of the best in the business. It’s filled with players that know how to play together, constantly turning over possession and probing for spaces, backed up by a Kevin de Bruyne who has been in excellent form. For us to completely withstand their advances is a sign of just how good Lovren can be when he’s on his game and is absolute justification for the manager’s decision to stick with him over Joe Gomez. Don’t get me wrong, I absolutely think Gomez is the long-term solution to our defence, but for now you go with the player in form and that’s the big dog. Yesterday’s performance and the result that it produced is vindication for all of the players that some of our supporters love to scapegoat. It’s time for that nonsense to stop. 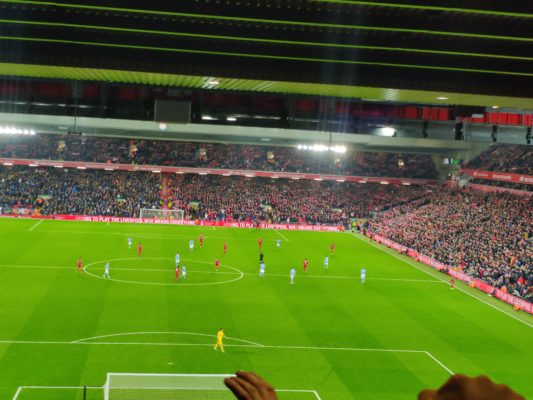 If you’d have said to me at the start of the season that Liverpool would draw level on points with Man City by beating them at Anfield then I’d have bitten your hand off for it. We now sit nine points clear of them and eight points clear of second. There’s still so much football left to play, but that is a truly glorious position for is to be in. Now we just keep fighting, keep winning and keep getting behind the lads that make up this phenomenal football team.