The results last weekend were perfect for the Reds. Manchester United, Arsenal and Manchester City all dropped points, meaning that our win against Watford put us firmly back in the driving seat for a top four finish with just three games to go. Considering two of those were at home, surely a return to the top table of European football would be ours for the taking? City’s 5-0 spanking of Crystal Palace, who deserve to get relegated for their decision to head to the beach once they’d beaten us, meant that goal difference swung in their favour should United manage to drag themselves back into the battle for fourth. Three points against Southampton felt like a must, so would Liverpool be able to do it all the easy way?

Liverpool are unchanged for four league games in a row for the first time since February 2014. Some games you may remember… pic.twitter.com/vrYnymaAwz

Even if you didn’t know the scoreline you’d still know the answer to that question. Whether you’re talking about Istanbul, Cardiff against West Ham or this race for the top four, Liverpool don’t do things the easy way and haven’t since the 1980s.We’d played Southampton three times before today and hadn’t managed to register a single goal. It was always going to be a difficult game, so patience and perseverance were likely to be key. How patient could a Kop be that’s desperate to see us finish in the top four for only the second time in eight seasons? More importantly, how intelligent could our players be against a team that wasn’t interesting in playing football? I’ve had a look at the major talking point:

Klopp Got The Starting XI Wrong

I’ve not been all that critical of Klopp this season. He’s made some mistakes, especially with his substitutions during matches, but more often than not I’ve been able to see the logic of his starting line-up. The same cannot be said of today. I’ll start by talking about Divock Origi, who I think has been very poor lately. The Belgian is young and may well still have a future at Liverpool, but his performances over the last few matches have not warranted continuous starts. His movement lacks intelligence, his play is ponderous and he is constantly caught on the back foot when a more experienced striker would be on the front foot and ready to attack. I honestly can’t remember one thing he did today that I thought was worthy of praise.

Daniel Sturridge may not be at one hundred percent, fitness-wise, but in my mind he is far more likely to offer something going forward and to interact with our other forward players than Origi is. Whatever we may think of the England striker, the other players in the team enjoy playing with them. He’s clearly far closer to the level of Roberto Firmino, Philippe Coutinho and Adam Lallana than his Belgian rival is. Why Klopp is continuing to refuse to give Sturridge a chance in place of Origi is baffling to me. Our number fifteen could easily have played for an hour today, caused Southampton some problems and then been replaced at the end. Instead we had no movement nor intelligence in the final third and barely asked questions of the Saints defence. 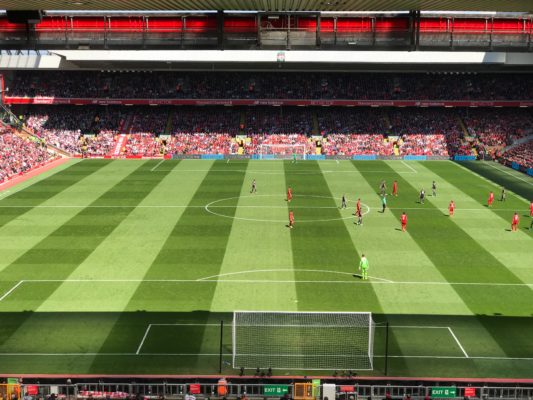 As for Adam Lallana, perhaps Klopp was concerned about his previous performances against his former club and that swayed him in his decision as to whether he should start or not. Whatever the logic, it doesn’t make a huge amount of sense to me that the England midfielder could manage nearly eighty minutes against Watford but could only handle twenty against Saints. I actually thought Lucas Leiva was very good today, but did we really need Lucas, Can and Wijnaldum in the middle against a Southampton side who had no intention of attacking? Even if Klopp felt as though Lallana couldn’t manage as much as an hour, I’m sure he could have had longer than twenty-plus minutes. Why on earth did he leave it so long to make changes?

The manager called it wrong today. We still should have won, of course, but that would only have papered over the cracks of a pretty dire performance. The contract with Manchester City’s performance against Palace yesterday was alarming to see. They had movement all over the pitch, a front six interacting with each other and shifting the play from side to side and speedy players getting in behind Sam Allardyce’s defence. We had James Milner cutting back in on his right and floating yet another aimless cross in to nobody in particular. Origi wasn’t helped by the poor displays of Firmino and Coutinho, but none of them were aided by the manager’s overly defensive starting line-up and refusal to make changes until late in the game.

A Left-Back Is A Priority

All of the talk from within the Liverpool ranks is that Klopp has no intention of buying a first-choice left-back in the summer. He is, the local journalists keep saying, happy with James Milner there. The rumours that continue to do the rounds are that we will buy youngster Ryan Sessegnon from Fulham as back-up for the former Manchester City and Aston Villa player. In my humble opinion, Jürgen Klopp is dead wrong if that’s his view.

When you’ve seen this type of game hundreds of times…

Don’t get me wrong, I’m not saying that Milner has been poor all season. When we were swinging earlier in the season plenty of supporters, myself included, were praising him as one of the best performing defenders in the league. Yet since the turn of the year the drop off in his form has been truly alarming. He offers absolutely nothing in attack and looks slow and ponderous in a position that requires speed and clever movement for it to work in Klopp’s system. I have no problem with the manager bombing out Alberto Moreno as the Spaniard is a braindead dimwit, but to feel as though Milner can continue to operate as our first-choice in the left-back spot next season is idiotic. 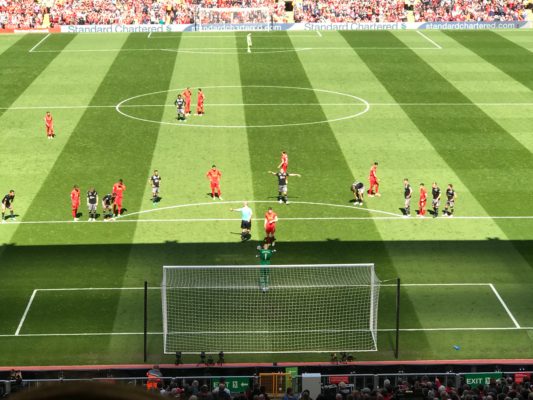 As I’ve already mentioned, his penchant for cutting back onto his right and floating a ball across the box when we don’t have an attacking player who can do anything with it has been one of the most frustrating habits of his this season. Combine that with the fact that Nathaniel Clyne can’t cross the ball well either and you’ve got two fullbacks who offer precisely nothing to us as an attacking unit. That wouldn’t be too bad if we were defensively sound, yet we’re not even that. Instead we play a system that asks the right and left sided defenders to get involved in attacks, leaving us exposed at the back but neither player produces anything in the final third.

So there’s literally no reason for Milner to be on the pitch.

The one thing that Milner does bring to the team is an unnerving ability to score from the penalty spot. He hasn’t missed one since 2009, so when the referee blew up for a penalty for us I momentarily celebrated. The problem was that Southampton did everything they could to put the England international off, from Fraser Forster booting the ball upfield to having defenders stand on the goal line to waste time. It was all gamesmanship, but it worked. It isn’t just hindsight when I say that I knew he was going to miss before he struck the ball. I said as much to the bloke I stand next to on the Kop. All those times he’s scored, this was probably the most pressured penalty he’s taken in ages and I felt they’d done enough to put him off. He can’t be overly criticised for it, but today he was poor and his overall play was worthy of criticism.

Top Four Is Still Ours To Lose

Had we won today we’d have been in a much more secure position for fourth, there’s no question of that. Yet Arsenal’s 2-0 win over Manchester United means that things have become decided more difficult for both of them in their bids to challenge us. Should we beat Middlesbrough at home on the final day of the season we would end the campaign on 73 points, regardless of what we do against West Ham next weekend. 73 points is a tally that would have achieved a top four finish every single time twenty teams have played and three points has been the prize for a win since 1981.

73 points has been enough for top four in every previous 20-team top-flight season in England since 3pts for a win in 1981. #LFC have 70 pts

Of course that’s not to say that we are guaranteed to get it this time around – we’ve got to win at least three points first of all – but if we miss out this year then it means that either Manchester United or Arsenal will have played out of their skin for their remaining games. The most Arsenal can now finish on is 75, whilst for United it’s 74. Liverpool will finish on 76 if we win both of our games. I understand the disappointed reaction in the wake of the full-time whistle, with two points at home from our last three games against Bournemouth, Crystal Palace and Southampton being really disappointing, but when all’s said and done we didn’t lose. 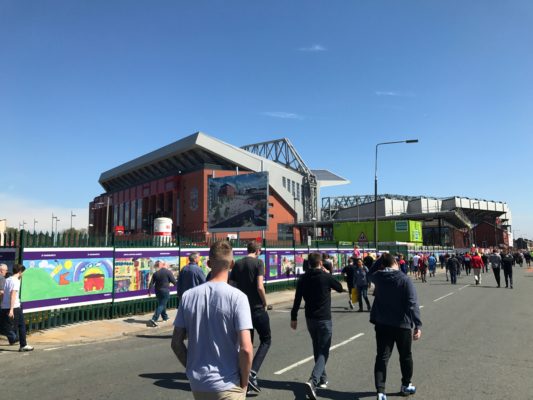 Anfield In The Sun

That was in spite of the appalling refereeing performance of Bobby Madley. I know I’ve spoken about referees a lot in my match reviews this season and so I’m wary of repeating myself, but goodness me. Poor refereeing performances aren’t always about the big decisions, the penalties not given or the red cards not shown. Sometimes when referees are at their worst it’s about their overall performance and in that regard Madley’s was one of the worst I’ve seen in some time. Anyone would think the Football Association had a vested interest in Manchester United playing in the Champions League, such was the hideousness of Madley’s decision making.

Got to say no excuses but how the hell is Bobby Madley a PL Referee his performance today was one of the worst I’ve witnessed at anfield!

I’ve no intention of pinning the blame on the referee, with Liverpool deserving of criticism for their lack of movement and intelligence, but the worst shout in football is ‘Forget the referee, we weren’t good enough’. The referee is literally there to uphold the laws of the game and Madley flat-out failed to do that today. At one point he blew for a foul, called Gabiadini over and the Italian refused to come. When he eventually arrived the referee did nothing, so what was the point in the charade? All he did was demonstrate that he had no control over the game, so Southampton continued to waste time and foul us for the rest of the game. Yes, Liverpool should have had enough to take all three points; the fact that we were practically playing twelve men didn’t help, though.