When Liverpool lost at home to Swansea on the 21st of January we essentially ended our title hopes. Slipping ten points behind the league leaders meant it would be a virtually impossible hill to climb, with our only hope involving beating the champions elect at Anfield and hoping they go on a losing streak. It’s fair to say, then, that there was a lot of pressure on this game. The pressure was unquestionably made worse by the losses to Southampton and Wolverhampton Wanderers, meaning that if Chelsea won it would equal a record of four consecutive home losses set in 1923.

Last time #LFC beat Chelsea at Anfield was in May 2012, when CFC couldn’t be arsed after FA Cup final. Before that: Nov 2010.

We didn’t lose, but sadly we didn’t win either. It means that we remain ten points shy of the Blues and the title is all but wrapped up for them. They’re nine points clear of both Arsenal and Spurs so could lose three games and still win the league on goal difference. The only way we have any hope whatsoever of competing at the top end is they lose three times, draw once and we win all of our remaining games. As well as we played at the start of the year, our recent form suggests that’s unlikely given how many teams we’re still to play who favour a low block. So how did last night pan out?

The last three games at Anfield before this one haven’t been great. We’ve lacked ideas, struggled to break three lesser teams down and generally just disappointed. The crowd have tried to rouse the team but quickly turned on the players when things haven’t gone our way, understandably getting frustrated at a seeming lack of ideas. What’s made the whole thing worse is the fact that so many the mistakes we were seeing were avoidable and seemed to be repeated regardless of which players made up the starting XI.

Plenty of energy from #LFC early and the crowd have responded. Cracking atmosphere inside Anfield. 0-0

On the way to the ground I overheard to blokes talking. One of them said, “The thing is, even if we get something out of tonight we’ll go and lose to Hull next week”. The other replied, “Yeah Klopp’s lost their trust now. We’re scared of everyone we play against”. This little exchange is flawed in so many ways I can’t even begin to be bothered to get into it, but it made me fearful that Anfield would disappoint on a night when its impact could be vital. Jürgen Klopp continuously mentions the difference the crowd can make and that point was emphasised in an interview between Jamie Carragher and Frank Lampard last week. 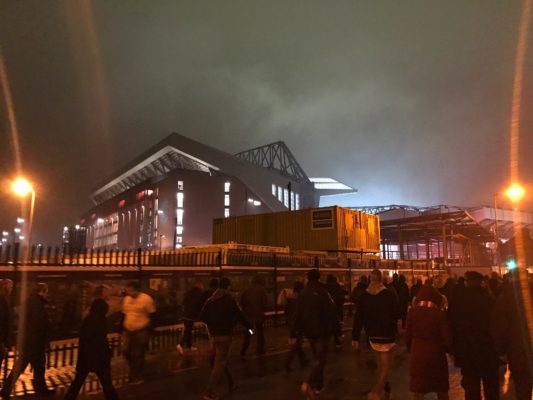 In the interview Lampard admitted that the Chelsea team he played in was better than Liverpool’s side but struggled to get results against us because of the Anfield crowd. The two blokes talking on their way to the match were indicative of what’s wrong with the current mindset of our supporters. Klopp asked us to change from doubters to believers, yet at the first sign of trouble we regress to being negative and assuming that the entire season has fallen apart. We have, after all, still only lost three games all season. Thankfully, though, the rest of Anfield didn’t have the same frame of mind as those two and gave a roaring reception for the players before kick-off and during the game.

It definitely made a difference. It took Chelsea a good while to settle, with numerous players kicking the ball straight into touch or mis-controlling it. Thibaut Courtois is one of the best goalkeepers in the league, yet he smashed it out for a throw in two or three times in the opening period. Sadly this is not a common enough occurrence. Next time we play the likes of West Brom at Anfield and the players don’t seem like they’re trying as hard as they did against Chelsea, it might also be worth bearing in mind that the crowd probably isn’t either. This match should be something of a touchstone for future performances, both from the supporters and the players. Do that and may well have a chance at glory before too long.

The Luck Isn’t With Us

When things aren’t going your way they’re really not going your way. I don’t want to bang on about refereeing decisions all the time, though I have to say I think Mark Clattenburg gave one of the most one-sided displays I can remember in a long time. We had to do little more than touch a Chelsea player and he would give them a free-kick, whilst our lads were getting clattered into all over the place and he just waved play on. Diego Costa’s dive for the penalty was utterly disgraceful, but what made it worse was the referee’s decision to give it almost before it had happened. Watch it back and you can see the whistle heading to his mouth and the Brazilian born Spanish international hasn’t even hit the floor.

Outrageous cheat, Costa. No wonder he missed. #guilty Great save Migs. Atoned for first half stupidity.

Clattenburg was equally poor for their free-kick. To call it ‘soft’ would be an understatement, with Eden Hazard losing control of the ball and then looking for the foul in order to make up for it. That sort of thing was given their way time and again but when Matic handled the ball twice in the middle of the pitch to deliberately break up our play there was no booking forthcoming. Not one of the 50/50 decisions went our way and I’m not surprised that Jordan Henderson eventually got booked for dissent; if I’d have been on the pitch I’d have wanted to nut Clattenburg, not talk to him.

The referee aside, however, almost none of the bounces seemed to go our way. For some time now that has been the case. The ball has ricochetted around a number of legs, for example, yet always seems to end up with the opposition. Time and again last night it was a blue shirt that ended up with the ball after a small melee, just as it always seemed to fall to a Swansea player in our previous league game or to a Saints lad when we went out of the EFL Cup. That’s not an excuse, just an observation. To win leagues you need a number of things and one of them is some good fortune. We haven’t been getting any off the officials and we haven’t been getting the rub of the green, either.

It’s not all about officiating. We should have scored another. But holy hell that was an appalling display from Clattenberg.

There’s a good argument to be made about Liverpool’s lack of a streetwise attitude on the pitch, too. Chelsea showed on numerous occasions last night how you can do small things to ensure your team gets what it wants out of a game. Shirt tugs when the referee can’t see; blatant fouls when the opposition looks to be breaking; time wasting to get to full-time. It’s not just the West London club that have done that to us lately, either. Saints, Wolves and the Swans all did similar things and reaped the benefits. If Jürgen Klopp wants us to compete for the title in the future then he needs to get his players to be a touch more intelligent in the darker arts of the game.

We haven’t been terrible at any point this season. Even in our darkest hour there has been a lot to be positive about. The game against Southampton is a case in point. We lost 1-0 in both legs but the home game was much better than the away one. We dominated the game, created several good chances and on another day probably score a couple of goals. Even without being terrible, however, we’ve still been making too many individual errors that are putting us under pressure. Much as I don’t like consistently talking about referees, so I don’t want constantly be on Simon Mignolet’s back. And yet…

Unfair free kicks are awarded all the time. The goalkeeper & wall need to be focused & ready. Not day dreaming as a set piece king steps up.

The Belgian has looked a much better player this season and seems to have responded well to the threat on his place posed by Loris Karius. However the truth is that he’s just not good enough for us in the long term and is emblematic of the issues within the squad. This game against Chelsea encapsulates everything about his game. He’s got the ability to make huge, important, crucial penalty saves, yes. But he was also at fault for the opening goal because he was too busy screaming at his defence to realise that the whistle had been blown and the ball had been hit. He is not consistent enough for the manager to know what he’s going to do from one game to the next and that’s a big problem. 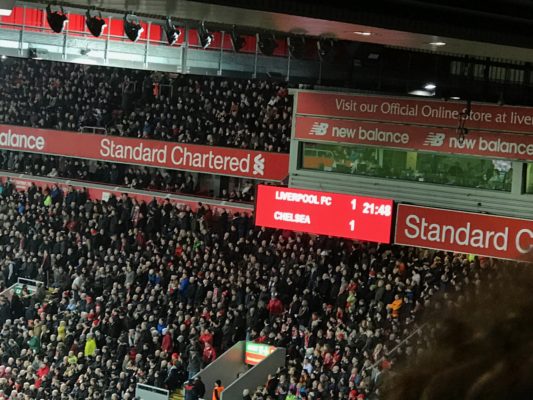 It would be unfair to suggest he’s the only one, though. Dejan Lovren is another player who can be brilliant when he’s on song but also has the ability to be completely braindead at times. Why on earth he’s smashing in a shot from fully forty yards against one of the league’s best goalkeepers is anyone’s guess. It’s not the first time he’s done it, either. It’s the sort of moronic decision he makes on a regular basis, like when he bundled over Cesc Fabregas with about five minutes of the game remaining and the Spaniard going nowhere. Mignolet, Lovren, Can,  Moreno. All players that are in or near the first-team squad that promise lots but deliver little. It’s time to rebuild in the summer.