Two wins in a row in Europe, a home victory and a comeback from a goal down; not a bad night’s work from Jurgen Klopp’s men, even if the performance did leave a little to be desired. If the Manchester City performance ‘wasn’t perfect’ then goodness knows what this was, other than scrappy.

A win is a win, though, and Anfield saw just its second win under Jurgen Klopp, even if they still haven’t seen one in the league. It wasn’t the rampaging Liverpool team that we saw take City to shreds last weekend, but neither was it the crumbling, mentally-weak side that lost so disappointingly to Crystal Palace before the international break.

Klopp made changes to his starting XI, as many thought he would, so a flowing display was never going to be guaranteed. But what were the key take-aways from the Reds’ match against the French team? What can be learnt from the team’s performance? We’ll have a look at some of the main talking points. As always, we try not to repeat ourselves whenever possible, so if you can’t see something that you think we really should be talking about then do have a look at some of our previous match reviews. Alternatively, why not leave a comment or drop us a line on Twitter? The beauty of football is the ability to discuss things with like minded people – something we love doing!

Let’s be honest, Simon Mignolet comes in for some unfair criticism. He’s never going to be one of the greatest goalkeepers every to grace the Premier League (or even the Anfield turf, for that matter), but he has some qualities that should be admired. He’s a good shot stopper, for a start. He’s also a trier and everyone loves a trier. But then, he’s also absolutely bloody awful at times.

The game against Bordeaux perfectly encapsulates everything that you will find from the Belgian ‘keeper’s game. He produced a sublime save with less than 10 minutes of the match to go, diving to his left to keep out Henri Saivet’s fiercely struck shot.

Yet earlier in the match he held on to the ball for so long that Joe Allen grew a beard that he didn’t have when Mignolet picked the ball up. He also decided, inexplicably, to rush out of his area before gently heading the ball down to one of Bordeaux’s on-rushing attackers. He got away with that horrendous error, but the former was well and truly punished.

It’s true that referees rarely punish the six second rule for goalkeepers. We all remember how Luis Suarez used to stand in front of an opposition team’s shot-stopper and count the six seconds on his fingers, forcing the ‘keeper to get rid of the ball quicker than he’d like or else asking a question of the officials that they rarely liked answering. But how often do goalkeepers hold on to the ball for so long that the seasons change?

Mignolet has form for this sort of thing. He remains the best goalkeeper in world football at making it look like he’s going to throw the ball out for a quick break only to ‘realise’ that there’s nothing on. Given Klopp’s love of quick thinking and even quicker movement, it’s difficult to see how Simon Mignolet exists in that world.

The Belgian isn’t a bad person. He seems to genuinely care about Liverpool and to want to do his best. But his best seems to be getting increasingly worse with reasons not to replace him becoming fewer and fewer. For now the Reds just have to hope that he’ll limit his brain freezes as much as possible until Klopp can do the only sensible thing and replace him in January.

Liverpool are conceding less goals under Klopp, but that seems to be in spite of their goalkeeper rather than because of him. Given that Martin Skrtel and Dejan Lovren are both prone to a defensive brainfart every now and then, it would be great if Liverpool could have a goalkeeper who knows how to fill his defence with confidence rather than dread.

Up For The Fight

It seems churlish to spend time complaining in the aftermath of a victory that sees the team through to the next round of the Europa League, yet Liverpool’s performance was far from flawless and worthy of at least a comment or two.

For time immemorial Liverpool teams seem to take to the Anfield turf convinced that they’ll win just by virtue of the game being at home and the team being better than their opposition. Perhaps part of the problem with the atmosphere at Anfield stems from such arrogance, with both the players and the crowd refusing to get geared up for matches they consider to be routine.

It’s one thing to play at your best when Manchester City, Chelsea or Everton come to town, it’s quite another thing to be as focussed and switched on when teams like Hull, Swansea or Bordeaux rock up. 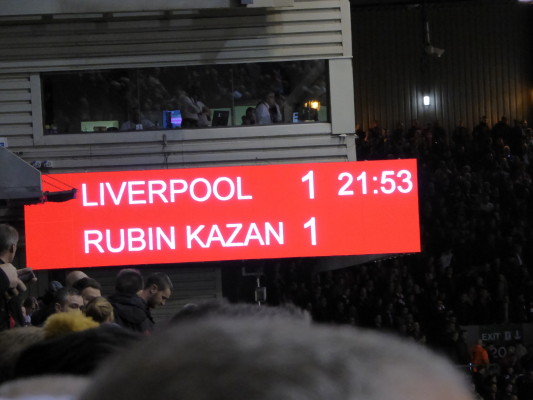 Teams Leave Anfield With Too Much

For all of the talk about Klopp’s need to figure out a way to get the home form sorted, there’s been very little discussion about the fact that the players often fail to perform to the standards expected of Liverpool Football Club. The sad fact is that over the past few years too many teams have been able to walk away from Anfield with more than they should have.

Hull City under Rafa Benitez, Blackpool under Roy Hodgson, Fulham under Kenny Dalglish, Southampton under Brendan Rodgers. These are teams that title-winning sides need to put the sword both home and away, yet they are also the teams that Liverpool routinely seem to struggle against no matter who the opposition.

Of course all teams sometimes struggle to win at home when they should, and it would be poor form not to point out that Liverpool made several changes to their starting XI for last night’s match, but it’s the regularity with which players under-perform against weaker opposition that seems to cause the Reds problems so often.

There are many different things that Jurgen Klopp needs to work on over the coming months and years. It is remarkable what a difference he’s already made in such a short space of time, something that needs to be commended. Yet if he really wants Liverpool to become a force once more then one of the most important things he’ll need to do is to adjust the mentality of his players to be as up for a game against a newly promoted side as they are against a title challenger.

Perhaps if Liverpool’s players are quick to let lesser opposition know that they’re not going to get anything out of their trip from Anfield then there might be a number of pleasant knock on effects. Maybe the crowd will get engaged in what’s taking place in front of them sooner and in a more vocal fashion. Perhaps teams will not be quite so certain that they can achieve more than they should be allowed.

None of those things are a given, of course, and Klopp will know more than anyone the size of the task at hand. But we’ve all changed from doubters to believers, so the next step is to believe all of the time, not just when there’s something at stake.

Christian Needs To Benteke His Chances

There is plenty to admire about Christian Benteke’s game. He is strong, unwilling to be cowed by strong defenders, quicker than he’s given credit for and – cliche alert – good with his feet for a big man.

Yet he’s far from the perfect player, with his propensity to score worldies but miss reasonably simple chances something that needs to be changed if he’s to become a genuinely world class talent. The game against Bordeaux featured a number of his best and worst traits.

His goal was magnificent. It came from an average cross that he was able to control with one touch before powering it past the goalkeeper to leave the result in little doubt. It was something he’d nearly pulled off earlier in the game only to see his first time shot go wide of the post.

Yet he also missed some reasonably simple chances or, in the case of one of his goals that was disallowed, found himself offside when he really shouldn’t have been. It’s that kind of sloppiness that he’ll need to cut out of his game if he’s going to become Klopp’s Anfield version of Lewandowski, for example.

There was also the goal that was disallowed because of a slight trip on the opposition defender, something that was almost certainly un-necessary in the circumstances. Of course it’s also the sort of thing that attackers sometimes get away with – just like defenders often get away with tugging at an attacker when a lofted cross is played in without conceding a penalty.

It’s the brainless things that are the most frustrating part of Benteke’s game, with the forward often happy to try to steal an advantage through nefarious means rather than his own intelligent play. Liverpool could have won at a canter last night if the forward had concentrated on doing his job efficiently rather than in the easiest way possible, the rules of the game be damned.

This is the 11th game at Anfield this season. Liverpool have lead by two goals for just 11 minutes in total… put this one to bed, lads.

Given that Liverpool have failed to score enough goals at Anfield it would be great if Benteke could start to take the simple chances as often as he takes the really difficult ones. That will become even more relevant if Daniel Sturridge continues to be made of fibreglass. Liverpool need goals, Benteke can supply them – he just needs to be more clinical and less braindead when it matters the most.