The Reds fought a long and hard campaign last year, scrapping tooth and nail to return to the top table that is the Champions League. Roy Evans once said that Liverpool without European football is like a banquet without fine wine, and we’ve all been going sober for far too long recently. Anfield was ready for to hear that anthem again, to see that flag being waved in the centre circle again, to have the floodlights burn bright once again. The biggest question was whether or not the players could live up to the expectation that a return to the big time naturally brings with it.

Any expectation that might have been on the players ahead of our first game in the Champions League since 2014 would have been made all the worse because of the loss to Man City at the weekend. The crowd wanted to see a response, but the players will have been acutely aware that shipping five goals is inexcusable at the best of times. That they were down to ten men for most of the game wouldn’t have made up for the fact that they fell apart. So could the team respond as well as we were all hoping? Or would the hangover from the Saturday afternoon at the Etihad result in a headache which would take a few days to get over?

Goals Come Too Easily For The Opposition

This Liverpool team has so much to recommend it. As a team on the attack we’re terrifying, with so many players for the opposition to worry about that they mustn’t even know where to start. Yet the extent to which we make it easy for other teams to score genuinely boggles the mind. If it’s not a midfielder failing to make a tackle or a goalkeeper completely missing the ball then it’s a defender tripping over his own feet to allow the attacker a free shot on goal. In just seven games so far this season we’ve conceded thirteen goals. Now that stat is skewed slightly by the Manchester City result, but even so it makes for depressing reading.

All I want, all I ask is that we make teams work hard to score goals against us. That’s not too much to ask, is it? APPARENTLY IT IS.

Once again the shout has gone up from Liverpool supporters that Jürgen Klopp should have bought a centre-back in the summer, but I’m honestly not sure the personnel is the biggest part of the problem. Virgil van Dijk being on the pitch tonight wouldn’t have made Emre Can complete the tackle he messed up ahead of Seville’s first. He could easily have tripped over has Dejan Lovren did too, given that that was just one of those things. Yet ‘one of those things’ seems to happen to Liverpool’s defence on a weekly basis. Far too often we’re found wanting, regardless of who is in the line-up. Joe Gomez’s red card, for example, could have happened to Alberto Moreno had he connected with a tackle he threw himself into midway through the second-half. 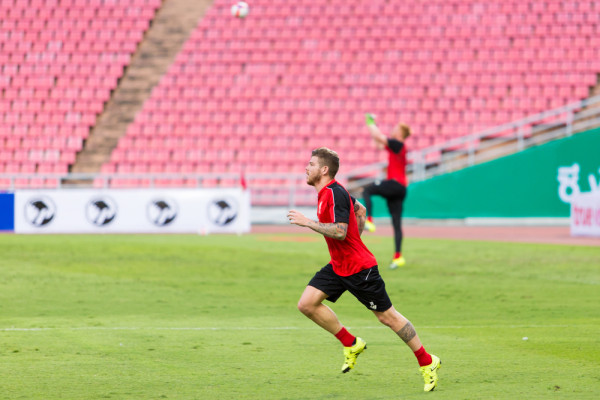 The problem we have is one of balance. It is virtually impossible to play a wide, expansive game of football with the free-flowing attack that we all love without simultaneously leaving the defence massively exposed. If your defenders aren’t absolutely top-class then you need to put at least one dedicated defensive-midfielder in front of them to help them out and give them cover. Whatever some people might think of Jordan Henderson, the manager isn’t asking him to perform as a out-and-out DM, so to criticise him for that is entirely missing the point. It doesn’t help when both the captain and Can have bad games at the same time, of course, because Klopp’s system doesn’t allow for passengers. It’s the sort of set-up that means anyone off their game or a slight mistake can be punished.

Dan Kennett on Twitter makes the point that the quality of chances we give away is significantly higher than it should be. The irony is that, for a defence that seems so porous, we don’t actually give away that many chances. It’s just that the chances that we do give away are as close to open goals as it’s possible to get. I’ve been arguing for as long as I can remember that Simon Mignolet isn’t good enough to our number one, but tonight showed that it doesn’t really matter who’s going to be between the sticks if you’re going to give the other team chances that are the open-play equivalent to penalties. The question isn’t so much about why didn’t buy a defender as it is about why the manager hasn’t yet done something to offer his defence some sort of help and protection. The players that make up the back five aren’t the best, but they’re getting no assistance whatsoever.

If Jürgen Klopp’s plan is that we simply continue to outscore the opposition then he might have to give it a serious rethink. As I mentioned before, the attacking this Liverpool team produces is close to breath-taking at times, but the wastefulness is like a punch to the gut. Roberto Firmino’s penalty miss will almost certain take the headlines and it’s true that the game would likely have been put to bed had he scored it. Yet the reality is that he wasn’t the only player who didn’t do enough in front of goal to cause Seville problems. On the one hand you have to be pleased with a match in which you have twenty-four shots on goal. In the first-half alone we had just shy of all of the shots Everton have had all season. On the other hand, though, only seven of those were on target.

Stats never, ever tell the whole story. However, lines 1, 7 and 8 here give a good indication as to why Liverpool didn’t win tonight. pic.twitter.com/G2BLsBVGF8

To make matters worse, we might have had twenty-four shots on goal but we only created one ‘big chance’. The opposition had two, which also happened to be there only two shots on target. This wastefulness has been a problem for some time under Jürgen Klopp. Last season we didn’t score enough goals when we dominated matches; even when we were scoring fours, fives and sixes they could and should have been sevens, eights and nines. Is this down to the manager? Is he an advocate of the idea that if you throw enough shots in at goal you’ll win more often than you don’t? Or is the players trying to score the ‘perfect’ goal and ending up with the sterile domination that has been a feature of Arsenal for so long? It’s difficult to tell, but if we’re hoping to threaten at the business end of any of the four competitions that we’re involved in then we need to get it sorted.

It’s entirely possible that we’re just warming up into the season, of course. We are only seven games in in all competitions and we’ve just come off the back of an entirely pointless international break. If this was a Manchester United match then pundits would no doubt be talking about the idea that the Red Devils will score a ton of goals ‘once they hit their stride’. It’s significantly easier for a team to score goals when they’re creating chances than it is when they’re not even doing that. You feel as though there could just be a switch and suddenly every shot we have ends up in the back of the net. Somehow, though, that doesn’t seem all that likely. After the City match at the weekend I wrote in my match review that Mohamed Salah needs to be more clinical, but it appears that the entire team has decided to be ludicrously wasteful for ninety minutes instead.

That game should’ve been dead and buried by half time. Incredibly wasteful and we pay the price. Feels like a defeat.

There’s no need to be hitting the panic button yet, of course. The season is very much in its infancy and if you gave me the choice over our attacking prowess or West Bromwich Albion’s defensive solidity I know which side I’d come down on. It’s just frustrating because you can see how a slightly more clinical attack mixed with a far more stingy defence would make us favourites for at least one piece of silverware this season, if not more. Philippe Coutinho’s return to the side was a welcome one, but he’s looking rusty. Get him playing regularly once more and combine his string-pulling with the pace of Salah and Mané and we’ll be fine. We just need to do something to get the players putting the ball into the back of the net more often than they go wide or over… 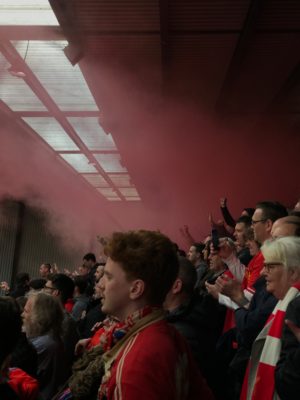 I honestly have no idea how footballers don’t flick the Vs at supporters every five minutes. Anfield was once known as being the home of the most intelligent football fans in the game, but it now seems as though they have been replaced by a bunch of braindead morons. Yes, You’ll Never Walk Alone was spine-tingling. Absolutely, the roar when the match kicked-off was a delightful release of pent up energy after too long away from the Champions League. But my goodness the majority of reactions from the supporters were a demonstration of stupidity. What good does having kittens when the defence passes the ball about at the back do? How helpful is shouting at the goalkeeper when he’s got the ball at his feet? Is telling a player to shoot from 25 yards really the brightest thing to do?

Anfield groaned at Henderson not taking a shot from 25 yards into a sea of bodies. Instead, a one-two with Moreno, who sets up Firmino.

Our first goal is the best summary of the Anfield crowd’s stupidity that I can think of. Henderson played a blinding pass to Moreno, who then went on to deliver a brilliant pass for Firmino to finish. Initially, however, supporters were moaning that the captain didn’t shoot. Had he done so, of course, those same people would have apoplectic when the shot hit one of the countless bodies in front of him. I know it’s not the done thing to slag off other fans. I’m aware that this makes me sound like a snob or a know-it-all. I’m sure there’ll be plenty of people ready to tell me I’m out of order. I don’t care. We all desperately need to get our act together if we’re to work together to make Anfield a fortress once more. If we’re going to lose our heads every time the players don’t immediately boot the ball away then there’ll be blood pressure problems around L4 for some time to come.