What a difference a win makes. Heading into the match yesterday Liverpool hadn’t won a league game in 2017. When you consider just how good we were in the second-half of 2016 that is a quite ridiculous stat. As mentioned in my pre-match betting piece, we had won three points from the last fifteen available to us before kick-off. We’d been knocked out of the FA Cup and the League Cup in the space of a week and then saw our slim title chances slip away with a pathetic 2-0 loss to Burnley. Given that Spurs are one of the best teams in the league at the moment, most Liverpool fans could be forgiven for fearing the worst.

This #LFC team exactly the same as the one which played at WHL earlier in the season apart from Lucas for Lovren. Hope they can play as well

In the wake of the game against Hull Jürgen Klopp made it clear that he wouldn’t accept that level of performance again. He expected a response and rumours swirled around Merseyside that he was going to wring the changes with his starting line-up. Would Mignolet drop to the bench? Who would make up the defence? Might Jordan Henderson keep his starting place? In the end, of course, the German went with what is widely considered to be his strongest team, the only exception being Lucas Leiva coming in for the injured Dejan Lovren. So how did the whole thing pan out? What are the worthwhile talking points from Liverpool’s first win of the year?

It’s All About The Mané

When Jürgen Klopp and his backroom staff consider which targets to look for in the summer they’d do well to bear in mind what a difference Sadio Mané has made to how this Liverpool team performs. There’s no question that he’s an excellent player and he demonstrate his finishing ability in this game. However the attribute he has shown that has had the biggest impact is his pace. He’s so fast that opposition teams don’t know what to do about him. He can turn on his back burners and leave defenders in his wake, opening up the pitch and creating space for his teammates.

Liverpool’s strategy for signing attacking players this summer: Sign all the fast lads. All of them.

Obviously players that can do nothing but run fast aren’t as useful as those that have something more to their game, but pace makes on hell of a difference and one of the ways that Klopp can give us the best chance of coping with teams that want to sit deep is by bringing in fast players who can stretch those packed defences. Ben Davies was given a torrid time by our Senegalese winger and his speed was one of the major reasons for that. Klopp must be wondering where we’d be in the league right now if we had someone else who could cause defenders as many issues as Mané does.

To suggest he’s little more than a speed merchant would be doing him a massive disservice, though. He’s a skilful, tricky player who defenders simply can’t cope with when he’s on form. Much like Raheem Sterling before him, he’s a player who is a lot stronger than his physique suggests. He can hold people off and he has an eye for goal that makes him close to unstoppable when he gets into good positions. He’s shown such determination numerous times – don’t forget he took the fastest hat-trick in the Premier League honour away from Robbie Fowler when he scored one in less then three minutes for Southampton.

How Mane appreciates space is a key strength says Pep Lijnders. Evident today. A rare speed merchant whose brain is as fast as his feet.

It was a brilliant team performance that saw us get the better of a very good Tottenham side, yet it was Sadio Mané that put the finishing touches on that performance. He’s an excellent player and his presence in the Liverpool team should finally put paid to the notion that the club need to make ‘marquee signings’. Most supporters wanted us to sign Mario Götze in the summer and were annoyed that we’d made yet another signing from Southampton instead. Meanwhile Götze continues to struggle in Germany and Mané fights another former Saints player in Adam Lallana to be named our player of the season.

For some time now the debate over Gini Wijnaldum and Emre Can has raged. The manager seemed to prefer his countryman on numerous occasions, especially against the so called ‘bigger’ teams. I certainly expected him to start ahead of the Dutchman against Spurs because of their strong midfield. Mousa Dembélé and Victor Wanyama are a dominating pair that have controlled most games they’ve played, so I wouldn’t have been surprised if Klopp had tried to counter them with the strength and physicality of Can.

Ridiculous how much more effective Wijnaldum is than Can. So quick, direct and precise.

How could Klopp not see that before?!

Thankfully he didn’t. Wijnaldum was absolutely brilliant. He controlled the midfield, never stopped pressing and gave Spurs a torrid afternoon. If Wanyama and Dembélé thought they were going to boss the game then they will have been shocked at how little time and space our central midfielder allowed them. The reports from Newcastle were that he tended to go missing in the big games, but there’s absolutely no sign of that so far for us. In fact, the opposite is probably true; he scored the winner against Manchester City and the equaliser when Chelsea came to Anfield, after all.

I’m more than aware that Emre Can is still a young player and he certainly has the potential to develop into a top-class midfielder. However the reality is that our play in the centre of the park is noticeably slower when the German starts for us. He’s a juggernaut when he gets going but almost looks as though he needs a push start before his legs kick into gear. He takes too many touches and isn’t adept at working with the fast-paced, fleet of foot and thought teammates that make us look so good when we’re at our best. I’m very much of the opinion that Can should only start ahead of Wijnaldum moving forward if the Dutchman is missing a leg.

That pass by Gini pic.twitter.com/SxHpdYk02w

As well as being strong in possession and quick to the press, it’s also worth pointing out how intelligent his range of passing is. The back-heel that set Lallana free at one point might be one of the most exciting things I’ve seen from a Liverpool player since the days of Luis Suarez. It was a genuinely brilliant piece of improvisation and we were unlucky not to score from it. He gave the very definition of a box-to-box midfield performance, breaking up a Spurs attack one minute before playing an inch perfect pass for Mané opener the next. If continues to develop his game the way he has since joining us then we’ve got a really good player on our books.

When The Press Works, It Works

One of the biggest things that has been missing from our game throughout January is the fight. It caused plenty of commentators to question whether we were showing signs of fatigue, with Jürgen Klopp’s training methods blamed for players seemingly losing the ability to run, harass and press. This game showed that that is absolute nonsense. Let’s not mess around here, Tottenham are a very good side. They’re also one of the best pressing teams in the Premier League and under Mauricio Pochettino they’ve developed that side of their game to earn plaudits for it. At Anfield yesterday we made them look absolutely ordinary.

8 – Spurs have conceded 8 shots on target; the most in a 1st half for Tottenham since Opta started collecting shot data in 03-04. Stunned.

Since the start of the season Tottenham have only conceded more than two goals in one game in all competitions. We could have put four or five past them in the first-half alone, constantly causing their defence all sorts of problems. That all came about because of how quickly and effectively we closed them down and cut out their passing lanes. Look at our second goal; it came from Adam Lallana and Sadio Mané closing down Eric Dier before the defender had any idea what was going on. They picked his pocket, raced clear and had three attempts at goal quicker than the Spurs defence could reset itself. 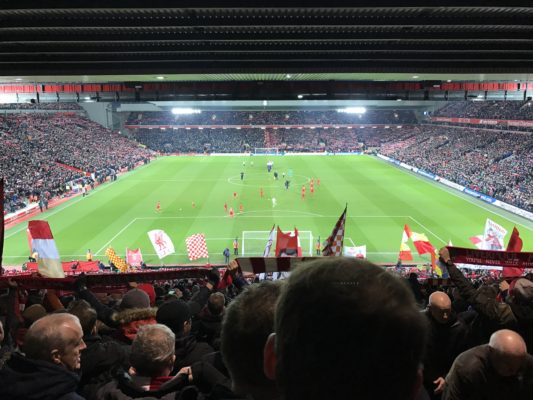 From The Kop v Spurs

The very nature of Klopp’s pressing game means that when it works it gives the impression of a team hungry for the ball and keen to cause problems. Tottenham’s players didn’t have time to think, let alone find passes or move into space. Any time they were on the ball we crowded them and made them panic – Hugo Lloris gave one of the worst performances you’ll see from the Frenchman all season precisely because our attacking players constantly closed him down and he couldn’t cope with it. We easily could have scored another goal from nothing more than the goalkeeper’s errors when being harassed by us.

Great performance from the Reds – like the last month never happened. Aside from brilliance of Mane it was founded on fight & determination.

It’s not easy to have such a work rate every week, of course. One of the biggest problems that we had in January was that we had nine games in a month. Add in the fact that the first match of 2017 came less that 48 hours after the last one of 2016 and the inability to recover between games was always going to be a factor. The big question that the manager has to answer before the winter period of next year is how exactly he gets his team to cope with such a busy schedule as it isn’t going to get any easier. For now, though, it’s a big three points in our battle for fourth and the manager has two weeks to figure out how to deal with the different challenge that will be Leicester City.