The fact that the international break was so interminably long was, perhaps, a blessing in disguise. We forgot what it was like to watch the Reds, briefly. We forgot how fun it is to rock up to Anfield and get behind the team. There’s an even an extent to which we forgot how much some of the players do our heads in. That we beat West Ham 4-1 before the break certainly helped, meaning that we could spend fourteen days basking in a well-earned victory and imagining the results to come. Last week I had a look ahead to our forthcoming matches and considered what might happen, starting with a win against Southampton.

International break over, back to the important football again tomorrow vs a team managed by a former Red. #LFC

If the rest of my predictions come true then I’ll be absolutely delighted. I think ten points and qualification to the knockout stages of the Champions League is an entirely realistic target. I think we all could have done without Chelsea finding their scoring boots, though the Blues haven’t been blunt in front of goal so far this season. Still, a 4-0 win will put them in a good mood before their trip to Anfield and there’s little question that they’re out trickiest tie of the next few weeks. Having said all of that, they won’t fancy coming up against us given the form we’re in. We’ve now won five of our last six, keeping four clean sheets along the way. Here are the main talking points I took from today’s game:

If Mohamed Salah keeps playing at the same level he’s managed so far then he could go on to become a Liverpool great. It’s unrealistic to expect the sort of loyalty from players nowadays that we might have seen in the past, so it won’t be overly surprising if the Egyptian gets his head turned by the likes of Real Madrid or Paris Saint Germain in the coming years. We might not have their money or even their likelihood to succeed, but Liverpool fans worship players like practically no other set of supporters in the world. He might be able to earn more if he moves elsewhere, but he’s unlikely to be loved any more than by the Kop.

The African Footballer of the Year nominee has had an incredible start to his Liverpool career. He’s notched up three braces in his last five games, scoring fourteen goals in eighteen games. His scoring record is world-class and he’s become an integral part of Jürgen Klopp’s Liverpool team. Any residual doubt about his abilities have well and truly been put to bet now. His first goal was something else, coming from out of nowhere. I was watching and expecting a cute little pass inside, not even seeing that a goalscoring opportunity was on. His time at Chelsea might not have left a good impression, but it helped him to settle into life in England and we should all be very grateful indeed.

We Don’t Need A Striker

Speaking of Mo Salah, the Egyptian has also helped to silence those Liverpool fans that are determined to say we ‘desperately’ need a twenty goal a season striker. Aside form anything else, he’s already well on his way to notching up that number of goals all on his own. People see Roberto Firmino’s numbers and think that he’s not offering enough to the side, but the reality is that Firmino’s selfless play and incredible work rate is what’s allowing our other players to get into the game. If you took Harry Kane from Spurs and put him into this Liverpool side, he’d score a bagful of goals. But at what cost?

As a slight puncture to the Harry Kane wankfest he has 8 goals from 59 shots. Mo Salah has 7 goals from 37 despite him being a poor finisher…

Salah is already proving himself to be an absolute steal at a little over £36 million, but let’s not forget just what a good addition to the side Sadio Mané was last season. The Senegal international hasn’t hit his stride this time around but I think a lot of that is down to the red card against Manchester City damaging his confidence. He’ll come good again during the campaign, of that I have no doubt. So when he starts banging the goals in the match his Egyptian counterpart and Firmino and Coutinho add more goals to their game, we’ll be hitting the net more often than a twenty goal a season striker would but without the fear that if he gets injured we’ll be in trouble. 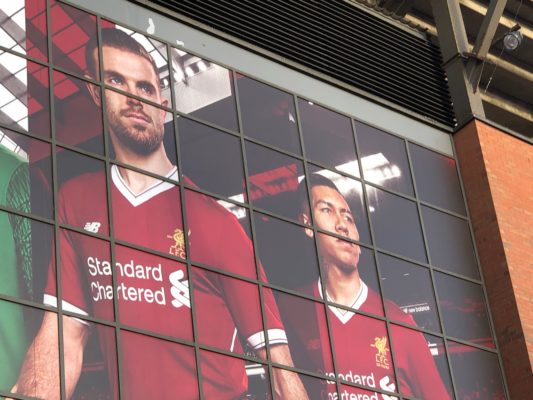 The think some people seem to forget is that even reliable goalscorers have dry spells. Manchester United have struggled to score over the last couple of weeks because Romelu Lukaku has been out of form. Spurs lost to Arsenal despite the fact that Harry Kane played for seventy-five minutes. It’s not as though all twenty goal a season strikers finish every chance their given. Our win today should finally put to bed the notion that we need to go out and buy a striker when doing so would disrupt our rhythm. If you still don’t believe me, have a look at the way we don’t look as fluid in our attacking when Daniel Sturridge is in the starting eleven. He’s one of the most natural goalscorers we’ve got, but we don’t look as threatening with him in the side.

Does Klopp Have Too Much Faith In His Players?

There’s a temptation when your team plays well and wins to be nothing but positive in the post-match write-up. After all, it’s somewhat churlish to complain about things when you’ve just watched your team enjoy a comfortable win against a team that turned up to frustrate. Even so, I did spend periods of that match wondering whether or not Jürgen Klopp had displayed a bit too much faith in certain players. More specifically, whether or not Klopp had displayed a bit too much faith in Dejan Lovren. The injury to Joel Matip ahead of kick-off will have forced the manager’s hand a little, yet there’s no question that the Croatian struggles when he plays against his former club.

47′ Dejan Lovren commits another foul, the defender needs to be careful, already on a yellow. Sadio Mané sees his effort blocked. 2-0.

In the past I thought it was because the Southampton supporters booed him and he tried too hard to prove them wrong, but they couldn’t even be bothered to do that today and yet he still had a few hairy moments. Don’t get me wrong, it wasn’t his worst game for us by a long shot. Yet when he got booked it was because he completely missed the ball and ended up kicking their attack as a consequence. There was also a moment when he headed the ball straight into the air and then seemingly lost it, not know where it was or where he was supposed to be. The defence kept a clean sheet, so I can’t slate him too much, but I do think that the manager needs to look to move him down to our third-choice centre-back and eventually move him away from the club altogether.

There seem to be two schools of thought amongst Liverpool fans at the moment. One of them says that the club have been poor in not getting Emre Can signed up to a new contract sooner, whilst the other is that he isn’t as good as he thinks he is. It’s not always easy to come into a match cold and perform at the top of your ability, but it was interesting to witness the performance of the German in comparison to Alex Oxlade-Chamberlain’s cameo. There’s a ‘hipster’ section of supporters who think that Can should be captain and Oxlade-Chambo was a waste of money. Today proved them very wrong indeed.

Emre Can has been horrendous!! Let him sign for whoever he wants

Oxlade-Chamberlain was all energy, industry and creating opportunities. Can, on the other hand, looked like his head was already in Turin. Rumours of an imminent departure to Juventus rather than signing a new contract for us have annoyed some people, but I’m just not sure that he’s consistent enough to be getting too upset over. Don’t misunderstand me, I don’t want to lose him for nothing. I simply don’t think that the club is making a monumental error in refusing to back down in the face of his apparent desire to have a release clause put in his contract. With Gini Wijnaldum, Jordan Henderson, Oxlade-Chamberlain and James Milner’s return to midfield, as well as Adam Lallana’s recovery from injury, I feel as though our midfield is stocked enough to mean we can let him go and not be panicking.

Have We Figured Out How To Beat The ‘Dross’?

Since we lost to Spurs at Wembley, Liverpool’s scores have looked like a ‘how to guide’ for teams wanted to win matches in regulation style. 3-0 against Huddersfield, 3-0 against Maribor, 4-1 versus West Ham and now 3-0 against Southampton. These are exactly the sort of matches that we struggled to win and even lost at times last season; the sort of games that Liverpool supporters saw as the club’s Achilles heel. Have we finally figured out how to win them? Can we, whisper it, go into such matches feeling slightly positive for the foreseeable future?

The fact that we played Saints four times last season and completely failed to score in all four matches should tell us everything we need to know about just how good today’s performance was. Yes, it was a different team with a different manager playing a different type of football, but the South coast club have been a bogey side for us for some time now. Dispatching them with such ease should give the players a degree of confidence moving forward. They’re also the fourth team in four games that have attempted to sit back and defend against us, only for us to blow them away eventually. Might it force a change of tactics from managers of similar clubs in the future? Possible. More importantly, it should force a chance of attitude from Liverpool supporters the next time we come up against the low block.