Did you have a nice Christmas? Did you get everything you wanted? I hope so. I had a lovely few days in which I drank too much, ate too much and generally just indulged too much. It’s back to reality now, though, and there’s nothing that says ‘reality’ more than a trip to Anfield on a freezing cold night to watch Mark Hughes force his team to revert to type and play hoofball for ninety minutes.

Stoke turned up at Anfield hoping to end our unbeaten run; a run which has turned Anfield back into something of a fortress. They haven’t been in great form and the Reds knew that all eyes would be on them after Chelsea, Manchester City, Arsenal and even Manchester United had won on Boxing Day. Could we react and impress when the pressure was on? I said in my pre-match betting piece that a convincing performance would be good with City to come. So how did it all go down?

Are Liverpool getting off to slow starts or are the other teams starting quickly? For two matches in a row now the Reds have struggled initially, only really getting into the game after about thirty minutes or so. Against Everton it was clear that the Blues put everything that they had into the opening half-an-hour, running themselves into the ground in an attempt to get their noses in front. It didn’t work, of course, and by the forty minute mark we had taken control of the game.

Jürgen Klopp names an unchanged XI for the fourth time in the PL. This is the first occasion he’s done it in successive league games.#LFC

Stoke did something similar and actually deserved their lead when it came. They nearly made it two moments later but Simon Mignolet produced a smart save to stop them. (As a side note, had Loris Karius conceded the first goal in the way Mignolet did there would have been uproar. Interesting to see the Belgian is receiving more slack). It was obviously a shame that Jon Walters got the goal, with the boyhood Evertonian’s political leanings and his youthful choice of team never endearing him to the Kop.

The problem teams are having against this Liverpool team is that you can’t suppress their attacking talent. If you don’t score a couple of goals during your period of domination then you may well live to regret it. Stoke City got themselves a goal to defend but couldn’t hold onto it, despite having nine or ten men behind the ball at times. It’s bizarre that, given some of the talent in the Stoke team, Mark Hughes continues to revert to a Tony Pulis style of play every time he comes up against us. It doesn’t work, despite what he spent his post-match press conference claiming.

Interesting they’re highlighting Liverpool’s record on defending set pieces.
Stoke and Liverpool have both conceded 6 in the PL this season.

Against a different team, though, our slow start could be punished. Manchester City are up next and, whilst they’ve got defensive problems of their own, they’re no slouches. Sergio Aguero returns from his ban in time to run at our backline and other members of their attacking unit like Kevin de Bruyne appear to be hitting form at just the wrong time. It’s crucial that we’re awake to the danger from the off or else we could find ourselves a few goals down before half-time.

Sturridge Is A Class Above

This Liverpool team has been setting goalscoring records left, right and centre this season. As things currently stand we’ve scored more goals this year than any other calendar year apart from 1985 when we bettered it by one but had also played one more game than we have to date. We’ve scored more goals at home this season than during the entire 2011-2012 campaign. Most importantly of all, before yesterday we’d done it all without Daniel Sturridge getting on the scoresheet.

Still feels like Sturridge could play a key role in this game. Either to add a goal or to hold the ball up and improve movement

The attacker is a class act, despite the shouts from some parts of the fanbase that he’s ‘lazy’. It’s a tricky thing to compare strikers, but Divock Origi and Daniel Sturridge are the two players who are most similar in the attacking positions. Roberto Firmino is often chosen as the frontman by Jürgen Klopp but his style of play is entirely different the more out-and-out striking pair.

Origi is young. That’s a mitigation that needs to be made straight away. He’s also been scoring goals since he came into the team and that is predominantly what he’s therefore after all. Yet he is something of a blunt instrument when compared to the surgical scalpel that is Daniel Sturridge. His injury record means that he’s often looked down upon by some Liverpool fans but he showed yesterday – and against Everton for that matter – exactly what he offers.

Daniel Sturridge is going to be massive for Liverpool in the second half of this season, I’m sure of it.

It will be interesting to see how Klopp uses him from now on. I wouldn’t be surprised to see him start in place of Origi against Manchester City after netting yesterday, for example. Was it always in Klopp’s plans to bring him into the side when Mané disappeared off the the African Cup of Nations? It would make sense. He is a brilliant player and I have a feeling that he could have a say on the destination of the Premier League title if he stays fit over the next few months.

The Anfield Crowd Can Make A Difference

Before I say anything else I want to point out that I thought the Kop’s chant of ‘Roberto Firmino, he drives when he wants’ was in extremely poor taste. Call me a prude or a reactionist if you want, but drink driving is not an issue to make light of. People have lost their lives and families have been ruined because of people too stupid to realise what a dangerous thing it is to do and I’ve got no time for people who want make a joke of it. Firmino will have to deal with the law and I hope they throw the book at him.

That said, when the Kop is on form they are one of the best sets of supporters in the world. There are still too many in the crowd who get nervous at the first sign of trouble. Shouts of ‘Not even good enough for the top four this lot’ after going a goal down could still be heard. Yet slow but surely the fans are starting to gain a degree of patience. It’s important that we don’t get too carried away with a difficult start or when conceding a goal.

The refrain of “Mané scoring, all around us Kopites singing, having fun. ’Tis the season, love and understanding. Merry Christmas, Everton” was funny and well-timed. I was also impressed that the Anfield crowd followed it up with songs about our own team. Unlike supporters of clubs like Manchester United, we sing about our own team first and foremost and indulge in songs about rivals only when the time is right. The tone was spot on in that regard.

When Manchester City come calling in a couple of days time the Kop will need to be in peak form. They are a class team and will pose us plenty of difficult questions. If they take the lead early or are dominating the game then we need to get behind the team even more vociferously. We need to be loud, positive and absolutely behind the team. We need to get there early with flags, songs and smoke bombs in the streets, like we did in 2013-2014 and against Borussia Dortmund. We need to do our best to make the Citizens feel like they’ve been beaten before they even take to the field.

Despite the ludicrous amount of money invested in the team in recent years, Anfield is the only ground that Manchester City have failed to record a win at since Sheikh Mansour took over at The Etihad. There’s a reason for that. In my opinion, the reason is the people that make up the crowd offer something unique to Liverpool. They may have the best players, the might have the richest owners, but you can’t buy the sort of passion that Liverpool fans bring to the table when it matters the most. 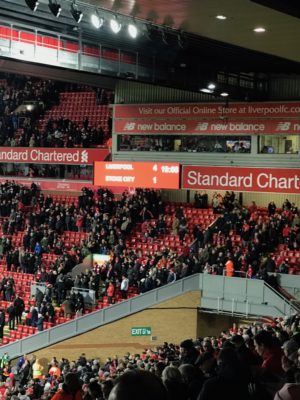 This is a time when it matters the most. As fans we have an opportunity to show exactly why we’re considered to be amongst the best in the world. If you’re going to the game then get there early and bring your A Game with you. Against Stoke the crowd responded as it needed to when the players required an extra lift. It made the difference between going in at half-time 1-0 down or 2-1 up. The pundits might be ready to hand the title to Chelsea but these players aren’t and the crowd shouldn’t be either. Bring on your Manchester City.