This week’s LFC news has really been dominated by just one story: The possibility of a takeover by a Chinese company called SinoFortone. The state-backed group have a frontman in the form of their managing director Peter Zhang and have reportedly offered Fenway Sports Group £700 million to buy the club. 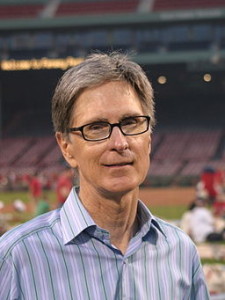 The offer came back in March, apparently, and FSG decided the best way to deal with it was to ignore it all together. But is that the right response from the American owners? I’m not suggesting that they should have immediately sold up, of course, but wouldn’t it have been worth exploring what sort of company they are and whether they were willing to enter a partnership, for example?

As fans our natural instinct is going to be to want FSG to sell up. When a company with deeper than deep pockets, backed by a country who are desperate to make inroads into the football market, want to buy the club you support and plough money into it then all you want is for that to happen. Would it be the right decision, though?

We’ve sort of been here before, haven’t we? When the Moores family decided to sell up ‘for the good of the club’ the Americans who bought it made all the right noises. Spades in the ground, new stadiums built and limitless funds for transfers quickly became stalling tactics, bleeding money from the club and taking us to the brink of bankruptcy for their own benefit.

FSG are far from perfect, but it’s surely a case of ‘better the devil you know’ when it comes to the owners of your club. They are in it for the right reasons, keen to help us develop on the pitch and trying to learn from their mistakes time and again. Buying ‘kids’ might not be the perfect method for the now, but Alex Ferguson showed at United how important it can be for your long-term future if you get it right with exciting young talent and then build around that.

My personal instinct is that SinoFortone could be very good for Liverpool Football Club. They’re a company that have already committed £5.2 billion to new projects in the UK over the past twelve months, specialising in developing infrastructure such as roads and railways. Would that not be ideal for Liverpool as a city as well as a football club?

In his piece Si Hughes makes the point that the company has already looked at where Liverpool needs development and is keen on building a new stadium in the dockland area of the city, despite the redevelopment of Anfield that is currently underway. They also want to redevelop Melwood and spread the Liverpool name throughout China by installing a number of footballing academies in the country.

The likelihood is that SinoFortone will invest money in and English club in the coming months or years. FSG need to think seriously about whether or not sticking with Liverpool is a long-term plan for them and, if not, plan an exit strategy. Unlike some I do believe that the American company have been good for the club, with John Henry and Tom Werner keen to get us back to where we belong by doing things in the right manner. Sadly the fact that the likes of Sheikh Mansour and Roman Abramovich are still very active in the Premier League means we’re constantly bringing a knife to a gunfight and sooner or later that’s really got to change.

Ah Martin, it’s been a fun few years, hasn’t it? The 31-year-old arrived in 2008 making 21 league appearances in the year when Benitez made a proper push for the title, only to fall short thanks to a machine of a Manchester United team and some rather dubious refereeing during their game against Tottenham Hotspur. He was around for another title push, too, when Brendan Rodgers took the Reds to within a whisker of the Premier League in 2013-2014.

Now It looks as if he’s on he’s way out of the club with an offer from Fenerbahce for his services apparently accepted by the club. His representatives aren’t exactly pushing him to accept it though, believing that Galatasaray and Besiktas will also come in with offers once the Euros have come to a close. Presumably because they haven’t actually been watching him play in the Euros.

Skrtel is the sort of player who is somewhat euphemistically referred to as a ‘great servant’ of the club, having been here for just under 8 years and played nearly 250 games for the Reds. The truth, though, is that he’s got lucky by being the least of Liverpool’s problems for vast periods of his time here. Whether it be Roy Hodgson being Roy Hodgson, Kenny Dalglish struggling to get Andy Carroll, Stewart Downing and Charlie Adam to click into a cohesive playing unit or Luis Suarez biting people, there has always been something to distract us from Martin Skrtel actually being quite rubbish.

He scored some really big and important goals during the ’13-’14 campaign but he was also part of a defence that conceded fifty goals and, ultimately, cost the club the title. It has taken Jürgen Klopp’s arrival and decision to drop him for most of the fans to realise that, actually, he’s pretty rubbish. The way in which the team fell apart at St. Mary’s against Southampton when he came on at half-time is indicative of the sort of ‘agricultural’ defender he really is. We’ve had some good times but, all in all, I won’t be sorry to see the Slovakian leave this summer.

Liverpool fans are, typically, getting frustrated with the club’s lack of action in the transfer market but to me it seems wholly predictable. There are three main things stopping any large movements at the moment, in my opinion: The Euros, the Copa America and the lack of pre-season.

Players are not going to want to be distracted by transfer talk whilst their off in France representing their country, with plenty of managers actively telling their players they are not to be involved in such discussions until after they’ve been knocked out of the competition. It’s also fairly difficult to fly into Melwood for a medical and to have your photo taken leaning against something when you’re playing in an international tournament.

Equally Jürgen Klopp can’t be sure what he’s after in the transfer market until pre-season has got underway. Has Jordan Henderson been able to successfully shake off his injury problems? If so then a brand new midfielder with a great engine isn’t as necessary. Is Danny Ings the ‘Jürgen Klopp type player’ that we all suspect he will be? If not then maybe we will need another striker. And will Joe Gomez come back from his ACL injury as the brilliant young prospect he looked at the start of the season? If so then there’s no desperate need to bring in another defender.

This one has only just come out as I’ve been writing my weekly round-up, that’s how fresh it is as a rumour. The Croatian has not really been getting many games at the Bernabeu and would be happy to leave Real Madrid in order to get some game time, according to reports. Liverpool were keen on the midfielder last summer but he chose to head to Spain instead of England, so now seems to be the perfect time to reignite that interest.

With just eight starts for Real since arriving from Inter Milan last summer it’s easy to understand why the 22-year-old might fancy turning elsewhere for games. But Liverpool are unlikely to want to stump up the £24 million that Real are apparently asking for for him and the Spanish giants are not keen on letting him go anywhere on loan. Roma are reportedly after him, too, but they have the added advantage of almost certainly being able to offer him Champions League football.

Using my metric of trying to guess where this story has come from, it seems likely that it’s the players’ representatives who have started spreading the word that he’s available and are using the name of Liverpool to further that cause. Whether that’s because he actually wants a move away or because he wants assurances over his future at Real remains to be seen.

This particular rumour is rife with nonsense right from the get-go. The Polish international is, so goes the story a boyhood Liverpool fan and would be keen to be reunited with the man who helped him become one of the most prolific strikers in Europe, Jürgen Klopp.

The problem is that he will only consider that ‘when Liverpool get Champions League football’, which won’t be for another year at the earliest. He’s also made it clear that his dream move would be to Real Madrid, but he’s aware that they’ll have to sell one of their big names before he can head there. Over two seasons at Bayern Munich he’s scored 47 goals in 57 starts, which is absolutely incredible. Reports suggest he’s feeling ‘unsettled’ in Bavaria and is ready for a new challenge, but surely even the most blindly optimistic Liverpool fan doesn’t think that a move to Anfield is likely this summer?

This one feels like the saga that no one really wants to be happening but is unlikely to die out until he signs for someone, anyone. The Polish midfielder has been less than subtle in his desire to play for the Reds, wearing a Liverpool top given to him by a camera crew when training with his current club. He’s repeatedly said he wants to work with Jürgen Klopp and is only a hop, skip and a jump away from turning up at Melwood with “I play for Liverpool” tattooed across his forehead.

I’ve covered the possible transfer for the Pole before now in a transfer round-up piece but it seems to have taken another twist this week with the President of Napoli, who are also chasing his signature, claiming that they have agreed a deal with Udinese for his signature but that ‘the player is doing everything possible to resist the move and not come here. He wants Liverpool’. Play it cool, Piotr, play it cool.