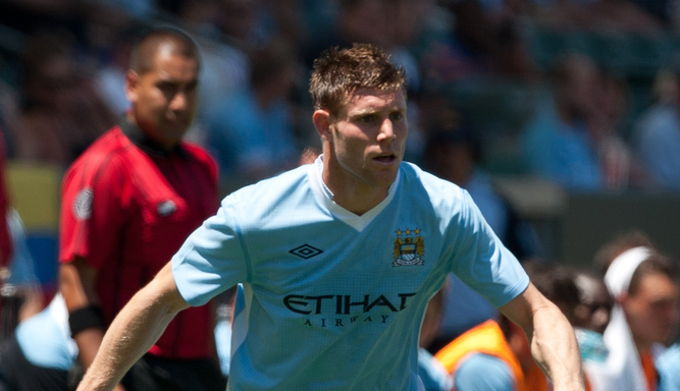 In a week when Raheem Sterling and his agent tried to force the hand of Liverpool over the youngster’s future by laughingly suggesting he’s considering a move to Manchester United, the club have confirmed one signing and are rumoured to be looking at a whole lot more. We’ve taken a look at this week’s runners and riders.

It’s a done deal! Liverpool announced on Thursday that they have reached an agreement to sign James Milner from Manchester City on a free transfer when the England midfielder’s contract comes to an end on July 1st. The 29-year-old has agreed personal terms with Liverpool, subject to passing a medical, and will bring energy and experience to the middle of the park at Anfield. He won two league titles, an FA Cup and a League Cup medal during his time at Manchester City and, whilst he’s far from the exciting, fireworks inducing signing many Reds fans will be hoping for, he could well turn out to be the most pivotal signing of the close-season.

Liverpool have received a boost in their pursuit of the player a disappointingly small amount of people are calling Chewie, when his agent admitted that they’re waiting to here from Sevilla before making any decision about his future. If they decide he’s surplus to requirement, though, then he WILL move on from the Spanish club. Liverpool are in the market for a goalscoring player this summer, and Bacca’s 28 goals in all competitions will have caught Brendan Rodgers’s eye.

Rumours have been abound for some time that Liverpool are keen to sign Real Madrid’s French ace Karim Benzema, so Kopites would be forgiven for getting excited when news emerged this week that the Reds are readying a bid for one of the Spanish giant’s forward players. They excitement may well have turned to bemusement, though, when they discovered that TalkSport are reporting the bid is not for Benzema, but rather Denis Cheryshev. Cheryshev joined Real as a youngster but has failed to make a breakthrough into the first team, spending the last two seasons on loan at Sevilla and Villarreal. Liverpool fans won’t be overly impressed with his 7 goal in all competitions, mind.

Last week we told you that Gazzetta dello Sport were saying Liverpool had made a bid for Inter Milan’s Kovacic, and it now seems that the English media have caught up with those rumours too. The Metro are saying that Liverpool have put forward a £12.5 million bid for the Croatian midfielder who scored 5 goals in 35 appearances for Inter in Serie A.

The Metro are also claiming that Liverpool’s ex-defender Alvaro Arbeloa could be ready to leave Real Madrid in order to make a sensational return to Anfield. He has been playing second fiddle to Dani Carvajal in the Real defence and with Danilo set to arrive at the Bernabeu soon it looks like his time could be up. Rafa Benitez has taken the reigns in Madrid and might well look to do his old club a favour.

Despite Simon Mignolet’s outstanding return to form after a shaky start that saw the Belgium only just miss out on the golden glove, rumours won’t go away that Liverpool are looking at a new goalkeeper this summer. One name linked with the club is Rui Patricio, and his exit from Sporting Lisbon seemed to loom closer after the Portuguese club signed a potential replacement. The Daily Express have the story that Sporting’s new goalkeeper, Azbe Jug, has a £33 million release clause in his contract, suggesting that they see him as their long-term option and that Patricio can look to find a new club.

The two things that seem to be cropping up in this week’s transfer rumours are The Metro and goalkeepers. The newspaper, most famous for coming free when you get on a train, is saying that Liverpool have already lodged a bid to bring Casillas to Anfield this summer. Real are being rather unashamed in their pursuit of Manchester United’s David De Gea, and his acquisition would mean that Liverpool could take advantage of Casillas feeling rather disenfranchised at the Bernabeu.

The final one for us to report this week is more of a ‘not-signing’ than rumoured to sign, as Micah Richards has hinted that he’d rather go and play with his ex-gaffer Roberto Mancini than come back to the Premier League. Liverpool’s bid for Nathaniel Clyne last month and rumoured interest in Arbeloa both suggest that they’re keen to bring in a right-back, with Richards already having some Premier League experience.

The England defender wants out of Manchester City, knowing that he’d be 3rd choice behind Pablo Zabaleta and Bacary Sagna, but he’s quoted in The Daily Express as saying, “The Premier League is fantastic but I had my best season at City under Roberto Mancini”. Given he’s already used to life in Italy after his season long loan at Fiorentina, don’t be surprised to see him make a move to Inter Milan if Mancini wants him there.