Home
>
Analysis
>
Steven Gerrard: The End Of An Era

For my blog this week I was all set to write about why it’s ok to believe that Liverpool can win the league. It was going to be a tub-thumping, chest-pumping piece that took those who are afraid to admit that we’re in the title race to task. I’d even started to write it and was about two hundred words in. Then I saw on Twitter that Steven Gerrard has announced his retirement from football and that changed everything.

My emotions are little all over the place when it comes to the news that Gerrard will never play professionally again, to be honest. I know that sounds silly, it’s not like there’s been a death or anything as serious as that. Plus I’d already been through it all when he decided to depart Anfield for the sunnier climates of Los Angeles more than a year ago. Yet I feel as though I’ve grown up with him and that all of my best moments as a Liverpool fan had Stevie G at the centre of them. This is, if you like, my thank you letter to one of Liverpool Football Club’s greatest ever players.

A Legend In Our Time

When you look at a club like Liverpool it’s easy to point to legends of the bygone eras. Opposition fans might accuse us of living in the past but it’s difficult not to when you’ve been lucky enough to have your club represented by figures such as Billy Shankly, Bob Paisley and Kenny Dalglish. For supporters of my generation we heard all of those names when we were younger but they were no longer relevant by the time we were old enough to understand the joys of football.

I’m 34-years-old, two years younger than Gerrard. That means that as I was really starting to get into football around the age of twelve or thirteen, he was a fifteen-year-old youth player desperate to make a name for himself and dreaming of one day playing for the first-team. Though the coaches at Liverpool always knew that they had a real prospect on their hands with the lad from Huyton they had no idea just how good he’d go on to be. In his wildest dreams Gerrard himself couldn’t have predicted it.

The end of an era. The legend footballer that was, Steven Gerrard. #LFC pic.twitter.com/ATNQWgQA9R

I can’t honestly say with my hand on my heart that I remember seeing Steven Gerrard make his debut against Blackburn back in 1998, but I do have memories of this young, slender lad running around in Red like a whirling dervish. I remember watching him jumping two-footed into tackle in Merseyside derbies and getting sent off, feeling annoyed that he’d risked us losing two points but totally understanding his reaction in that most passionate of games.

I can say with some certainty that I will have watched the vast majority of his 710 appearances for Liverpool. Whether it be at the ground, on Sky Sports or via some dodgy site, I’ve seen him at various times score screamers, lash himself into tackles and drag the football club I love through games by the scruff of their neck. I’ve seen him take to the field with players not fit to lace his boots, like El Hadj Diouf, and yet act in as professional manner as you’re likely to see from a young lad.

Steven Gerrard: “Thank you to the amazing fans of Liverpool, England and LA Galaxy for the incredible backing you have given me” #LFC pic.twitter.com/kK4MDG0Vaf

For me and many people of my age Steven Gerrard was Liverpool Football Club. He was an embodiment of what the club stands for and his never-say-die attitude saw us achieve things that seemed like dreams when I was younger. It’s difficult to express with words what it meant to see him throw his arms in the air after he scored the first in Istanbul. The sheer belief it pumped into me that we might be able to salvage something from the game. Who knows how the players must have felt, watching this colossus demand more from them, ask them to push themselves to their limit.

It hasn’t been nothing but glory in Gerrard’s career, of course. The biggest moment that he’d want to change if he had a chance came on the 27th of April 2014. At home to Chelsea, Mamadou Sakho overhit a pass to Gerrard, by then playing in his new deep-lying defence midfield role. He tried to control it but it escaped him and, in trying to recover, he slipped. Demba Ba was onto the loose ball in a flash, putting it between the legs of Simon Mignolet and giving José Mourinho’s side the lead.

Liverpool spent the entirety of the second-half chasing the game, Gerrard perhaps too intent on making up for his mistake to realise that 45 minutes was plenty of time in football and patience was the key to breaking down a resolute defence. By the time the Iago Aspas corner went to nobody and Chelsea scored their second we’d as good as run ourselves into the ground and history was re-written from a glorious title win to an ignominious defeat.

Steven Gerrard was named in the PFA Team of the Year 8 times! PFA Merit Award winner 2015 and crowned PFA Players’ #POTY in 2006 🙌🏻 pic.twitter.com/soWgFlX0Zf

For opposition fans, especially Evertonians and Man United supporters, this was mother’s milk. Ever since it happened they have acted as though it somehow takes the sheen off Steven Gerrard’s career. That is especially hilarious when it comes to the Bluenoses, mocking a player who has achieved more in his career than they have in in the last two decades. Gerrard hadn’t even made his first-team debut the last time the Goodison crowd saw their team win a trophy, so their mocking is laughable. 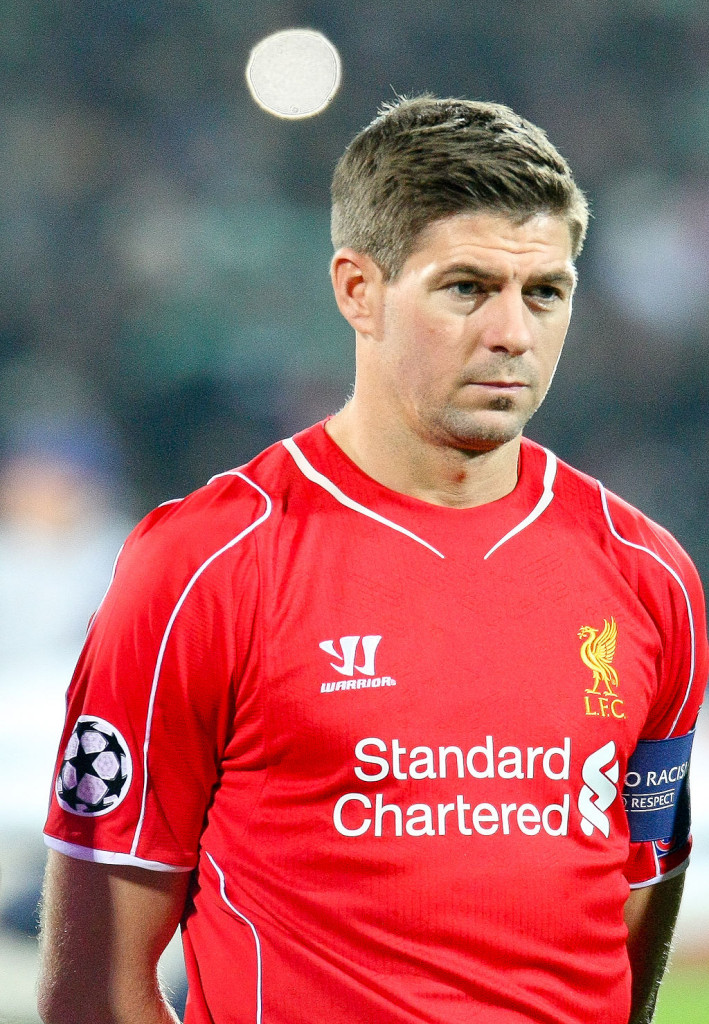 The thing I find most weird about opposition fans singing the ‘Slippy G’ song is that the only team that benefitted from it was Manchester City. Chelsea won the game but still went on to finish third in the league, whilst Manchester United weren’t even involved in the title chase that year and effectively celebrate the title being won by their nearest rivals. As for the likes of Stoke City or Southampton fans singing it, what are they on about? If you’re not a Manchester City fan and sing that song then you need to ask yourself why, because it’s a little bit pathetic to be honest.

Opposition fans will always try to play down Steven Gerrard’s achievements because that’s what fans of other clubs do, but they’ll never succeed. To end your career with the league title being the only major trophy you didn’t pick up is a fantastic achievement and more than most other players can even dream about. To do that during an era when Liverpool were arguably at their weakest since before the arrival of Bill Shankly is even more impressive.

That’s something that I think is often over-looked when it comes to the career of Steven Gerrard. He was the captain of Liverpool at a time when Manchester United had their greatest ever manager in position and building an unstoppable juggernaut. He was playing for a team that had let their rivals get ahead of them in terms of spending power and development of their stadium. He was then part of a team that had to compete against clubs that benefitted from financial doping to the tune of millions of pounds.

Could have picked any club in the world from 2003 to 2010 and they’d have snapped him up. He didn’t he remained at #LFC. Never forget that

At any moment he could have left Anfield and walked into any club on the planet, he really was that good. Instead he stayed at Liverpool knowing that any win with the Reds was worth one hundred times a win with another club. If Gerrard had wanted a league title he could have won one with Chelsea or Manchester United, with both clubs keen on signing him in 2005. His career is about more than just that one piece of silverware and he’ll take far more stock in what players like Zinedine Zidane and Fernando Torres say about him than some fat gorp in a replica Aston Villa shirt.

For me personally I’ll remember four moments for the rest of my life. The strike he hit against Olympiakos at Anfield must go down as one of the greatest goals ever scored at Anfield on a European night, and it’s in some extraordinarily illustrious company. We had no idea just then that it would be so important, hoping that a trip to the semi-final stage or similar might allow us to sign some half-decent players in the summer.

I’ll remember an even more impressive goal he scored against West Ham at Wembley the following year, thundering the ball into the back of the net from what seemed like the halfway line. Once again rising above all other players on the pitch and proving his class with a goal that few in world football have the technique to score.

I’ll remember him slotting the penalty away against Fulham before taking his shirt off and spinning it over his head, giving us all the belief that we could genuinely win the Premier League. It wasn’t to be, of course, but that takes nothing away from the feeling of being unstoppable, of that being our time. It was glorious.

More than anything else, though, I’ll remember being on the phone to my dad after the penalty shoot-out in Istanbul. I was hoarse and barely able to talk, crouched down outside a pub in Birmingham and sharing that moment with my old fella back home on Merseyside. We were miles apart from each other but closer together than ever before, sharing a moment that had seemed like an impossibility just an hour before. I’ll remember Steven Gerrard lifting the European Cup above his shoulders as fireworks and streamers went off all sound him and feeling like that was what life was all about.

Steven Gerrard deserves to have his name mentioned in the same breath as the very best players Liverpool Football Club has ever had. Thank you, Stevie. For everything.