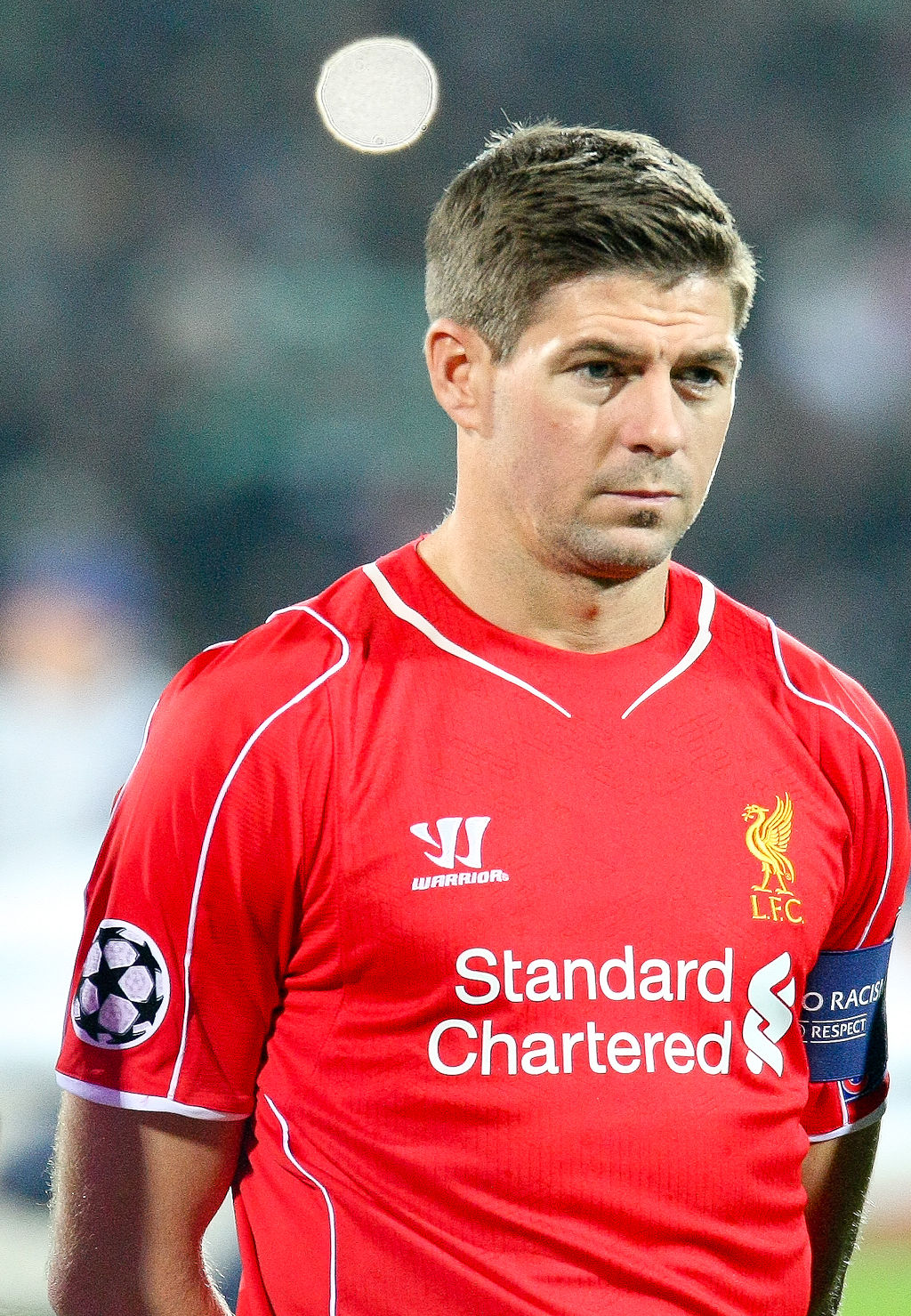 There are a host of names that every football fan knows: Gascoigne, Lineker, Beckham. There are others that are cult heroes to the fans of the club they played for, but aren’t remembered fondly by anyone else: Kyrgiakos, Poborsky, Osgood.

And there are some that stand astride the world of football like a colossus. One of those exceptional few has just two games left of his career with the club he’s loved all of his life. His name?

He jogged onto the Anfield turf for the first time as a scraggly little 18-year-old on the 29th of November, 1998. He replaced Vegard Heggem as Liverpool ran out 2-0 winners over Blackburn Rovers, and a baggy shirt with the number 28 sat on his back like it belonged to his dad and he was the work experience kid.

But Gerrard’s career isn’t one that can be explained with stats or numbers; his isn’t a career that will be remembered for any one specific moment.

Every Liverpool fan will have their own memories of Gerrard: the strike against Olympiakos at Anfield in 2005; the header in the Champion’s League Final that became the Miracle Of Istanbul; the wonder strike against West Ham in the FA Cup in 2006. There is no shortage of classic Gerrard moments when you look back over his career.

Opposition fans have spent the last year relishing the moment that he slipped against Chelsea in last season’s title race, handing the initiative – and eventually the Premier League crown – to Manchester City. An odd moment to celebrate if you support anyone other than the Manchester club, as your club, by definition, wasn’t even in the title race when Gerrard’s foot failed to plant itself properly in the Anfield turf.

When the dust settles on his illustrious career, however, no one but the most ardent opposition fan will think of the slip when they think of Steven Gerrard. They’ll remember the moment he ran over and kissed the camera when he scored against Manchester United at Old Trafford as part of Liverpool’s dismantling of the Red Devils in 2009. They’ll remember when he scored a penalty against Fulham at Craven Cottage before taking off his shirt and spinning it over his head in 2015. They’ll remember him lifting the Champion’s League trophy after inspiring an unbelievable comeback against AC Milan in 2005.

One Of The Best

Regardless of your footballing allegiance, Steven Gerrard has to be considered one of the finest footballers of his generation, if not of any generation. England may not have won a trophy during Gerrard’s time playing International football, but there’s not much the lad from Huyton could have done about that.

At Anfield, though, Gerrard won every major trophy apart from the Premier League. He turned down moves to some of the best clubs in the world, and whilst some may claim that Gerrard will always regret not moving to Chelsea, for example, those that do simply don’t understand the man they’re talking about.

For Gerrard, his entire being has been about Liverpool Football Club. There’s no doubt that he would have won the league had he signed for Jose Mourinho in 2005, and that that would have completed his medal collection. But when he looked back on his trophy cabinet in the years to come it would seem hollow, like he’d sold out.

To let Gerrard say it in his own words, he stated after the recent 1-1 draw with Chelsea at Stamford Bridge that, “I would have signed for him [Mourinho] on three occasions if I wasn’t such a big Liverpool fan. He knew why I couldn’t do it because I love Liverpool Football Club. It always means more when you win for your people”.

A Lad From Liverpool

That’s who he’s played for every time he’s pulled on the Red shirt: his people. Born on the Bluebell Estate in Huyton on the outskirts of the city, Gerrard is a Liverpool lad through and through. He married a girl from the city and he carries the weight of Liverpool fan’s expectations every time he runs on to the pitch.

He’s always been a complex character, too. He’s been driven by a fear of letting people down, of not being good enough. He admitted that he doesn’t sleep well the night before big games, visualizing not just what might go right but also fearing what could go wrong.

Liverpool Football Club was founded in 1892, which means it’s been in existence for 123 years. Steven Gerrard has been playing for more than 15 of them, which in turn means that he has been one of Liverpool’s most important players for a tenth of the club’s existence.

During that time he’s seen Liverpool challenge for the title under Gerrard Houllier, Rafa Benitez and Brendan Rodgers. He’s also seen the club struggle to compete on far more occasions than he’s been happy with. From an FA Cup, League Cup and UEFA Cup treble in 2001 through to the most famous Champion’s League comeback of all time in 2005, Gerrard has been the focal point of Liverpool’s winning teams time and again.

Captain In The Tough Times

He has had to drag some mediocre Liverpool teams through the doldrums and on to victories that few expected them to achieve. He’s also been the captain of the club during one of its most turbulent periods. As Rafa Benitez made Liverpool one of the best teams in Europe on the pitch, he also waged war against the owners off it.

Under Hicks & Gillett, the Americans who bought Liverpool in 2007, the Reds went close to going into administration and had the soul ripped out of the club. There were protests outside Anfield, fans turning against fans and civil war erupting on the terraces. Steven Gerrard, as a local lad and a Liverpool supporter, would have felt the dissention more than most.

Imagine, for a second, being a local lad at a club whose fans have expectations that far outstrip the reality of the situation the club itself is in, having to carry the weight of those expectations on your shoulders year after year after year. It’s no wonder he occasionally had a sleepless night!

Yet even without a full night’s rest before the biggest games of his career, Gerrard has gone on to be a living legend. He’s re-invented himself time and again, changing the player he is to fit in with what’s needed. He’s played in every position on the pitch apart from goalkeeper and has been the mainstay of every different iteration of team that each of the different managers has come up with.

He spent most of his career as a box-to-box midfielder, a powerhouse of a runner whose bursts of energy and thunderbolt right foot caused defences nightmares for years. Under Rafa he was re-invented as a right-winger who linked up with Fernando Torres to perfection. Together they were the best attacking force in world football for a time.

When Brendan Rodgers set up the diamond formation he used Gerrard at the base of it, sitting in front of the defence like a footballing quarterback; spraying the ball out wide and forward and protecting the defence. It was a re-invention that few thought would work but that nearly won Liverpool the title.

Time and tide wait for no man, though, and whilst he repelled attacking teams last season he can’t stop the aging of his bones. This season he has found himself on the bench more regularly than in the starting line-up and it’s more than he’s been able to cope with. He’s not arrogant; he knows he’s getting older. But he still wants to be making a difference, he still wants to feel the buzz of getting ready to face an opposition team and he knows that that won’t be the case if he stays at Liverpool.

So the fans, players and staff at Liverpool FC are gearing up to say goodbye to one of its greatest ever servants. It will be a tough day at Anfield on Saturday when the Reds play Crystal Palace. There will be 38 thousand people in the ground but millions more there in spirit, wanting to bid him adieu.

Anyone born in the 1980s hasn’t known an LFC team without Steven Gerrard in it during their adult years. He’s not just a player, nor is he just the captain of the club. He’s an icon, a living legend, a hero.

Liverpool Football Club will miss him. Not just on the pitch, but off it. Virtually every player who signs for the club talks of Steven Gerrard; of wanting to play with him, of how welcoming he is. He’ll be back at some point, of course, and it shouldn’t be put beyond him for him to manage the club in the future.

But when they’ll miss him the most is when backs are against the wall and things aren’t going well; when trouble rears its ugly head and Steven Gerrard won’t be there to shine a light in the darkest corners of the pitch. Time and again Gerrard has been the person to drag Liverpool through the difficult moments.

After Saturday, he won’t be there to do that any more. There’ll be a Steven Gerrard sized whole at Anfield, at Melwood and in the city of Liverpool. It will take a while to get used to. It may never be the same again. For now though, let’s not mourn what we’re about to lose but celebrate what we’ve had. Steven Gerrard has been one of the greatest players football has ever seen.

We’ll let the man himself have the final word:

“When I die, don’t bring me to the hospital. Bring me to Anfield. I was born there and I’ll die there”.