In my honest opinion, Mohamed Salah is the best player in the world right now. Whilst he might have been voted seventh in the most recent Ballon d’Or ceremony, the Egyptian King is doing things with a football that can’t be ignored. His goal against Manchester City at Anfield was utterly outrageous, only for him to follow it up with a goal against Watford that was almost identical. Opposition teams might know what he’s going to do, but that isn’t the same as being able to stop him. From the point of view of a Liverpool fan, it is amazing to be able to watch someone at the absolute top of their game playing week-in, week-out, but with his contract due to expire next year, there is no doubt that we would all breathe a little easier if Fenway Sports Group were to get it sorted and tie him down to a much longer term. The question is, do they want to do that or might they prefer to sell him?

Mohamed Salah says he is “not asking for crazy stuff” in contract talks, as he reiterated that it is up to #LFC to decide his future ✍️

Looking at things from the point of view of a supporter, it is really easy to just want us to tie him down to a longer contract. For the avoidance of doubt, that is very much what I believe the club should be doing. If the forward was speaking in the press about his desire to leave Merseyside then I’d be coming at this from the opposite point of view, but all he’s talked about is how much he wants to stay. The problem is, I’m not the owner of the club, looking at the fact that in the not too distant future we’re going to have to invest heavily in both midfield and attack, to say nothing about certain aspects of the defensive unit that might also need to be refreshed. The calls for Trent Alexander-Arnold to move into the middle, for example, continue to grow louder, but if that happens then we’ll have a gaping hole at right-back that needs to be filled. The money from selling Salah might be more appealing than keeping him into his 30s.

He’s More Than Just A Footballer

Mohamed Salah is a global icon. It is entirely reasonable for people to expect to see his face plastered all over Egypt, but you can walk around other places, such as New York, and Salah won’t be far away. In the GQ article, the journalist writing it, Oliver Franklin-Wallis, talks about how Salah can barely go anywhere or do anything with being mobbed by people. For the magazine shoot, the Egyptian had his photo taken wearing a retro Liverpool top and suddenly the price of buying it with retro sports vendors shot up by hundreds of pounds, such is the influence he can have on everything from the football pitch to the fashion world. The good news is that there are plenty of brilliant independent stores that sell LFC-themed outfits, but goodness knows how quickly the demand would shoot through the ceiling if the man himself was snapped wearing one.

That is the sort of thing that the powers that be at Fenway Sports Group need to think about before they sanction the sale of the forward. Yes, he’ll bring in a chunk of money, but what will the club be losing as a result? If Cristiano Ronaldo’s shirt sales when he returned to Old Trafford earned Manchester United enough to cover the cost of his transfer fee, might not a deal between Liverpool and an independent trader like Love Follow Conquer offer a huge amount of money to the club? 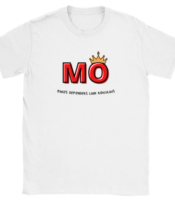 The  ‘Mo Makes Defenders Look Ridiculous’ t-shirt from Anfield Apparel might have done an outrageous trade after he tormented City and Watford, had it been officially linked to the club. He is at the peak of his powers right now, so losing the cultural icon that he is feels like a ridiculous idea, given how well he’s playing to match that sense of being so incredibly important off the pitch.

Would His Sale Cover The Cost Of A Squad Overhaul?

The other question that Fenway Sports Group’s higher-ups need to ask themselves is whether or not the sale of Mohamed Salah would even earn them enough to cover the cost of a squad overhaul. The sale of Philippe Coutinho to Barcelona for £142 million allowed the Reds to bring in Alisson Becker and Virgil van Dijk, with those two players transforming the fortunes of the club in the seasons that followed. They solved long-standing problems for Liverpool, which is no longer what we need to move to the next level. In order to challenge Manchester City for the title on a consistent basis, we need to have better options than James Milner to start games at Stamford Bridge, as well as having an attacker that would rival Salah, not replace him. FSG might want to bury their heads in the sand, but if we’re to take the battle to City then the club needs investment on top of keeping Mo, not as a result of selling him.

On Salah’s GQ interview: “There’s nothing in it that’s unexpected. I know that Mo wants to stay. We want Mo to stay. That’s where we are. It takes time. I think it is in a good place. I’m very positive about it.”#LFC

It is fairly clear that the manager wants Salah to stay, so FSG need to think about how much goodwill they will lose with supporters if they sanctioned his sale. Yes, it might allow them to make the purchases necessary to freshen up the squad, but if you’re doing so with a cost of losing the best player in the world then is it worth it? What sort of sign of ambition does that show they players that you’re trying to buy? It doesn’t seem like a sensible strategy to me to allow a player at the top of their game to leave, so I can’t imagine the likes of Jude Bellingham watching that and thinking it is a good show of strength. We’re already falling behind Manchester City without weakening ourselves in return for a gamble on the ability of other players that we want to sign in his stead. For an ownership that prides itself on good business practices, I don’t see how selling Salah in order to fund a squad overhaul fits into that bracket.