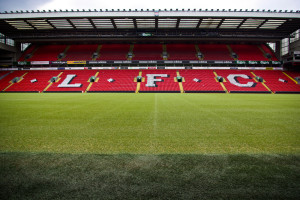 Whether you’re a dyed in the wool Liverpool supporter or only have a passing interest in football in general it’s more than likely that you’ll have heard of Anfield. It’s one of the most famous stadiums in the world and has been home to Liverpool Football Club since 1892. With a capacity of 54,167 since the opening of the refurbished Main Stand and the famous Kop overlooking the pitch, Anfield is known for its incredible atmosphere.

In these pages I’ll be telling you about the history of the stadium as well as giving you some information about the seating plan and, perhaps most importantly of all, telling you which of the pubs in the area are the best to head to for a pre-match pint.

It’s all part of the service here at andcouldheplay.com. Named after one of the most famous songs sung by the Kop choir and in honour of Kenny Dalglish, ACHP is a blog I run alongside betonthereds.com. The more observant amongst you might guess that that is a website filled with betting tips that have a Liverpool FC twist to them. Make sure you check out both the blog and the betting site if you’re the sort of person who likes to read about the Reds or have a flutter on their matches.

The beauty of Liverpool’s ever-growing fanbase is that there are still millions of people who know all about LFC but have yet to visit their Mecca. There’s no shame in that. Some fans will have you believe that there is a ‘locals v wools’ argument surrounding supporting Liverpool. Ignore them, they’re not real Liverpool fans. True Reds believe the mantra sung by Gerry & The Pacemakers in that well-known tune ‘Ferry ‘Cross The Mersey’:

People around every corner, they seem to smile and say,
“We don’t care what your name is boy, we’ll never turn you away”

So where exactly is Anfield? The stadium actually takes its name from the area of Liverpool in which it is located. Anfield the area (and, for that matter, the ground itself) is actually located quite a way outside of the city centre. It’s not exactly easy to get to, but it’s not like visiting a foreign country either so don’t panic too much!

If you like to use a satellite based device to help you navigate your way around the place then the post-code you’ll need to get yourself to the home of Liverpool Football Club is L4 0TH. If you’re in the centre of Liverpool with your back to the river Mersey then the stadium is to your 11 o’clock.

Getting To The Ground

Let’s be honest, for a first time visitor the easiest and quickest way to get to the ground is by taxi. If you don’t mind sharing a cab then just ask anyone you see wearing a Liverpool top if they fancy jumping in with you and you’ll be there in no time.

I won’t bother giving you driving instructions as sat-navs and phones are a lot more accurate than my directions, but sufficed to say if you don’t use either of them then you’ll be wanting to get into Liverpool before following the signs to the ‘Stadia’ (Everton’s ground Goodison Park is nearby). There’s no parking directly outside Anfield but you’ll be able to park on some streets about fifteen minutes walk away.

The Soccerbus is a convenient way to get to the ground with other fans. It runs from Sandhills Station, which is reachable on the Merseyrail Northern Line. It runs for two hours before the match and just under an hour afterwards. At the time of writing it costs 50p and so is probably the most cost-effective way of getting to Anfield on a match day.

This page does exactly what it says on the tin. Do you want to know about how Liverpool came to occupy Anfield in the first place? Did you know that Everton used to play their games in front of the Kop? Are you unsure about the meaning of the Shankly gates? This is the section of the website for you.

Looking forward, you can also read about future plans for the stadium in the redevelopment guide.

If you’re a first time visitor to Anfield then you might like to know all about where the best place in the ground to sit is. This is where you’ll find out. This isn’t just a re-hash of info on Wikipedia, though. As a lifelong Liverpool fan there aren’t many parts of the ground that I haven’t sat in, so I’ll be giving you all of my personal insight into where to plonk yourself for the match.

Most of us enjoy a pint or two before the game. Here’s the section of the website that will tell you exactly which boozers you should be considering heading to for your pre-match pint. Again, this is all about personal experience.