The interesting thing about football is how often narratives inform your thinking. Despite putting nineteen goals past Watford, Hull, Leicester and Stoke at Anfield, the loss to Leicester City that was sandwiched in between wins over Spurs and Arsenal reinforced the idea that the Reds don’t know how to beat the ‘lesser’ teams in the league. As soon as the full-time whistle went against the Gunners people started tweeting things like, ‘we’ll lose to Burnley now’. The pressure was on Jürgen Klopp and his team to prove the doubters wrong, but would they do it?

This whole mentality from a large proportion of our fans who expect us to lose to Burnley today is all part of the wider problem.

Against both Arsenal and Spurs a fast start has helped. It put us on the front foot and meant that they had to come out and try to break us down. Sean Dyche isn’t known as the Ginger Mourinho for nothing, so I’m sure it will have been part of Klopp’s pre-match plan to ensure that the Clarets got nothing to cling on to early doors. How frustrating, then, that we conceded after just seven minutes. Even more irritating was the fact that they had got into similar positions two or three times before they scored, meaning we had plenty of warning shots. But how did everything pan out? What were the major talking points from the game?

I’m 100% on board with the idea that Liverpool need to learn how to get results against the ‘poorer’ sides in the Premier League. Our position in the ‘mini league’ shows that Klopp knows how to set up his side against the likes of Manchester United and Chelsea, which is great, but learning how to steamroll the bottom thirteen or fourteen teams is far more important in terms of trying to win a title. The question is, are we a bit too complacent sometimes? Time and time again it has felt as though we expect to win simply by virtue of being Liverpool Football Club and turning up. I’m not saying it’s a lack of respect, but too often we seem to content to remain in second gear against weaker sides and presume our strength will show.

Where’s the fight in these players? Will turn up against Arsenal but are complacent against substandard opposition. No aggression #lfc

Is it a problem with the players, or something in the way that Jürgen Klopp and his backroom staff prepare them for the games? It’s a difficult one to put your finger on. It’s also entirely fair to point out that opposition teams have their own plans and set up to frustrate us. After the game Sean Dyche said the footballing equivalent of “They don’t like it up ’em” and there may well be something in that. The problem with having plenty of skilful players is that they’re not necessarily keen on a physical battle. Burnley turned up today looking to disrupt our rhythm and get involved in a bit of the rough stuff. Despite their manager’s insistence that they don’t get the breaks, they were aided and abetted today by a referee who was more than happy being inconsistent with what he deemed to be fouls.

Getting away from the referee, mainly because I think they’ve been uniformly awful at Anfield this season, here’s the most important thing I could say to players and fans alike if I could: We do not have a de facto right to win football games. We have to head into these games with the arrogant belief that we’re better than the opposition, but the desire to treat them as though they’re Barcelona and we have to crush them into the ground in order to prove our superiority. That is the only way that we’re going to win on a consistent basis. Assumption of our victory before a ball has been kicked does a massive disservice to sides who go into the game knowing that they have a point to prove. Chelsea have beaten the dross often enough to know that they can ‘just do it’, we haven’t.

Be Patient, Not Ponderous

There are times when I wonder whether some of our players mistake patience for ponderousness. Klopp undoubtably tells them that they’ll need to be patient against sides that like to sit back and defend, but do the players think this means that they should move the ball around slowly and never try to force the issue? On repeated occasions today we passed it around the back, moving it from side to side with the urgency of a snail heading towards a salt spill. What, exactly, will have scared Burnley about seeing James Milner pass the ball to Ragnar Klavan, who passed it to Joel Matip, who shifted it to Nathaniel Clyne? It took us until there was about ten minutes left in the first-half to register a shot on target.

That was Liverpool’s first shot, off or on target, excluding blocked shots. At home against a team that hasn’t won away all season. Cripes.

There’s no question that some of that is down to Burnley’s solid defensive line and set up, but it was also because we were so ineffective moving the ball forward. Tom Heaton had virtually nothing to do until he had to pick the ball out of the net. That is criminal against a side that has picked up just two points on the road all season. We’re at our best when we move the ball around quickly, penetrating into the final third with speed and intelligence. That didn’t happen anywhere near enough today and we made it easy for the Clarets to stick to their game plan. They’re a solid, well-organised side that knew exactly what to do to target our weaknesses at the back whilst nullifying our attacking threat.

It’s a difficult conversation to have, but at some point Jürgen Klopp needs to have a serious think about whether or not Divock Origi is good enough. At times last season he was virtually unplayable, scoring vital goals against the likes of Borussia Dortmund in our Europa League run. Yet he hasn’t reproduced that form once so far this season. The usual response to players like the Belgian is that ‘he’s still young’, which is very fair. The problem is that even young players get to show a little bit of promise. Ben Woodburn is a case in point. He looked more exciting during his thirty minute spell on from the bench today than Origi has all season.

To be fair to Origi, I thought his support team were all poor today. Sadio Mané was on the ball a lot and trying to do things, but nothing he attempted came off in the first-half and he gave the ball away far too sloppily for my liking. Obviously he gets a pass as he’s probably been our best player of the season, but his play today made things even harder for the youngster. Likewise Philippe Coutinho had another poor game. The Brazilian hasn’t looked himself since he returned from injury. He’s one of our best players, but he’s in a terrible run of form just at the minute. I had hoped that his consolation goal against Leicester might have changed that, but he’s stunk the place our in his last two Anfield appearances. 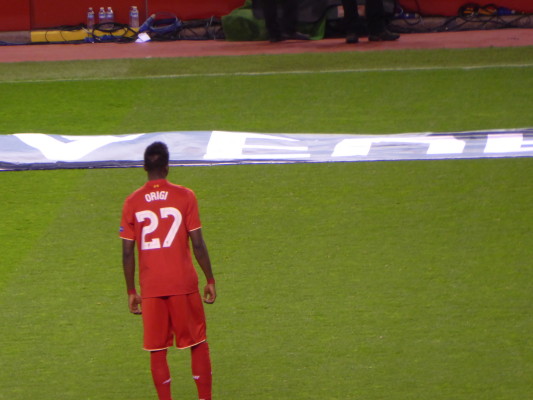 With Adam Lallana struggling to influence things because of Burnley’s low-block, Origi had no one helping him out. It’s perhaps slightly unfair, then, to single him out for criticism, but a truly top-class player finds a way to make it work and I’m concerned by the fact that the Belgian hasn’t looked at it all season. Much like with Daniel Sturridge, I’m fairly certain that there’s a big extent to which the way that Klopp sets up doesn’t help an out-and-out striker, yet if that’s the case then what’s the point in having him in the squad? He barely won a header today and completely failed to hold the ball up, so I’m not sure what he’s adding. One for the manager to ponder.

Can’s Performance Was An Embodiment Of The Team

I’m not a massive Emre Can fan. I’ve never hidden my feeling on the front. So I am entirely at risk of accusations of bias when I say that I thought he was terrible in the first-half. Much like Origi, he wasn’t overly helped by those around him. It took Gini Wijnaldum some time to get into the game and I’ve already mentioned that I thought that Lallana wasn’t really at the races, but even so Can could barely make a straightforward pass. In a weird way, though, the German appears to be the human version of this Liverpool side. He can look excellent against the stronger sides, but put him in against a lower level team and he doesn’t look like he knows what he’s supposed to be doing.

The midfielder scoring the winning goal was, perhaps, an apt conclusion to a poor performance for both player and team. It masked what was an otherwise abject display and covered some glaring deficiencies. Ultimately, of course, it is goals that win games and Can might well point to his winner and say that he did his job. I’m not sure it was anywhere near enough and I think that if Klopp’s got a tricky decision to make over Origi then he’s got an even harder one to come to terms with when it comes to Can. His countryman has been poor more often than he’s been good this season, yet he’s still young and definitely has bagfuls of potential. With Klopp feel as though he’s got the skills to unleash that potential?

The Anfield crowd’s reaction to Can is also a microcosm of how it reacts to the team in general. It didn’t take people long to get on his back for misplaced paces or silly fouls given away entirely unnecessarily. You could sense the nervousness and frustration around the ground when Burnley took the lead, just as you could tell people were irritated any time that Can failed to do what those in the Kop felt that he should. To an extent I feel sorry for him over that, but rumours of stalling over a contract because he wants more money are never likely to win over a crowd that haven’t been blown away by him this season. He’s got ten league games left to prove he’s worth the new contract he’s been offered. Fail to do that and he may well find there’s nothing left on the table to sign.