It’s fair to say that my look at the defensive third caused some issues for some people. I’ve never done player ratings, so I hadn’t previously experienced the righteous manner in which some supporter react to the assignation of arbitrary numbers based on one person’s experience. The fact that I gave the defence a rating of seven, based on my opinion that we need to bring in a back-up goalkeeper, a player who can cover both fullbacks and that only Virgil van Dijk has shown any degree of reliability in terms of fitness saw quite a lot of people on Twitter take the hump. In fact, the entire enterprise caused a chap called Dave, who I have had a number of perfectly pleasant interactions with over my time on Twitter, to inform me that I was guilty of writing ‘clickbait’ and that he was ‘muting and unfollowing’ me. Sufficed to say that I wasn’t expecting such a remarkably polarised reaction to a piece that was simply me expressing my opinion.

Getting a bit click baity now.
Decent is a nonsense description.
I am officially out. Muted and unfollowed.

For those of you that consider yourselves to be regular readers of my work it should go without saying that I don’t do clickbait. Whilst everyone who writes stuff is pleased when someone reads it, I’d like that to be because the feel I’m a good writer rather than I’ve written a headline designed to drag people in that bears no relation to the actual words in the piece. I’m sad to have lost Dave as a follower, of course, but I won’t change my opinion because it doesn’t please someone else. These pieces aren’t based around what the team achieved in winning a European Cup, but rather how I interpret the state of things moving forward. Of course I’m aware that Jürgen Klopp and his team know what they’re doing. I have a huge amount of faith in Michael Edwards. That doesn’t mean that I don’t think we got lucky at times last season with injuries and that we can’t improve, which is the whole point of these pieces. With that in mind, then, here’s my take on the midfield.

There Can Be A Lack Of Creativity

Jürgen Klopp sets up his teams in a manner that facilities things for the front men. That means that the job of the men in the middle is to get the ball forward as quickly as possible and hope that the likes of Mo Salah, Sadio Mané and Roberto Firmino can produce something special. Don’t get me wrong, 115 goals across 53 games in all competitions is nothing to turn your nose up at, yet of those 115 goals just 23 were scored by players you’d say played in the midfield, with six of them coming from Xherdan Shaqiri who most people thought was being signed to rotate with the front men. Add into that the fact that only two of James Milner’s seven goals were from open play and you can see that it’s not exactly the most unfair thing in the world to suggest that the midfielders that the manager has at his disposal aren’t the most creative group in the world.

As I say, the manager doesn’t ask his midfielders to be creative but that doesn’t mean that we can’t be disappointed in the fact that they aren’t. When the front three struggles for whatever reason, either because they’re well marshalled or because they’re up against a deep-lying defence, it would be nice to know that one of our midfielders could stick the ball in the back of the net on a fairly regular basis. It will be interesting to see whether the manager decides to continue to deploy Jordan Henderson in the more advanced role that we saw him take up towards the end of the campaign. Even his most ardent critics weren’t too disappointed to see him there and his surging run is part of why we were able to open the scoring against Barcelona at Anfield. I love watching the captain play and think that he has adapted brilliantly to the more defensive role the German assigned him, but he’s exciting to see when he’s in the attacking third.

Injuries And Age Are My Main Concern

My concern moving forward is that, just as with the defence, we seem to be putting a lot of faith in players being injury free despite the evidence suggesting that’s unlikely to be the case. John Henry spoke over the weekend about how Alex Oxlade-Chamberlain’s return and an injury free Adam Lallana would give us midfield creativity, which will definitely be the case if either of them are ever fit enough to be selected. For Oxlade-Chamberlain the criticism is perhaps slightly unfair, but after missing a year of football there’s no guarantee that he’ll come back into the team in the same form he was in when he left it. As for Lallana, he’s getting older all the time and age doesn’t tend to increase the body’s ability to recover from injury. He was the embodiment of Klopp’s football when the German arrived in 2015, but since then the team has passed him by and I’m dismayed by suggestions that he won’t be moved on this summer.

Right, why would you not, for example, get rid of Lallana for say £15m, then replace him with a Tielemans or a Ziyech? Why? Why would that not make total, complete and utter sense? In what world is keeping Adam Lallana a better idea?!

Then we come to James Milner. I’ve had a love-hate relationship with the journeyman during his Liverpool career. I’m more than aware that he’s a class act, but there have been times that he’s looked so off the pace of the game that it’s not even funny. Mention anything along those lines and someone will inevitably point to the fact that he is apparently always the fittest player in pre-season, but that’s a bit of a flawed take in my opinion. For starters, a 95-year-old man can run a marathon but that doesn’t mean I want him playing against Man City. On top of that, we seem to rely on the former Leeds man to cover a myriad of sins in our squad, being the main cover for both fullbacks. He’s had hits and misses on that front, but he’s only going to have more of the latter with each passing year. I thought the idea of him moving back to his former club if they’d got promoted would have been perfect for all parties, but it wasn’t to be.

Midfield is a tricky one to evaluate. I haven’t spoken about Gini Wijnaldum or Fabinho, nor have I gone into much detail about Naby Keita. Shaqiri had some excellent performances at the start of the season but stank the place out against Barcelona in the second-leg, only to put the cross in for the third. The reality is that I think we need to freshen things up based on my lack of faith in Lallana and co, but I can see why the manager doesn’t want to. 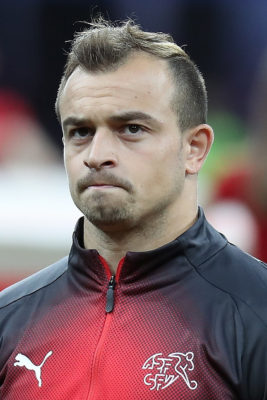 I’ve no idea how much trouble this take will cause, but based on my overall opinion I’m going to give the midfield moving forward a 6.5 out of 10.
Tweet Pin It