When you talk about Liverpool’s biggest rivals, there are only two teams that come into your head: Everton and Manchester United. I think there’s something of a divide about who considers which team to be the club that the most like to beat. Older Liverpool supporters still remember the days when Everton were a genuine footballing force and will always consider them to the club that we need to keep our noses in front of. For those of us ‘younger’ fans, however, the domination of Manchester United over the last two decades or so means that they will be the side that we fear losing to the most. I’m thirty-five, so the last time Everton won at Anfield – not won a trophy, mind, just won an away derby – I was eighteen. Over the same period, however, the Red Devils have won eight Premier League titles, two FA Cups, two League Cups, the Champions League and the Europa League. I absolute love Everton’s demise & hope they never win another derby, but you’ll struggle to persuade me that they’re just as much of a rival to us as Manchester United. It feels at the moment as though we’re on the precipice of a turning point in terms of footballing supremacy.

The bitter rivalry between Manchester United and Liverpool is now played out on a global stage but the origins of the divide are deeply rooted in the battle for supremacy in England’s northwest. pic.twitter.com/1htPWrTIl0

Liverpool ruled the roost for the best part of two decades before the tables were turned and our friends from down the M62 took over. The big problem for the Reds was that the club was really poorly managed during the period in which the Red Devils took over from us, with the appointment of Graeme Souness being disastrous and the club being far too slow to move with the times. You’d think that Manchester United will have learnt lessons from that, but the appointments of David Moyes and Louis van Gaal suggest that that isn’t a given. They’ve kept winning trophies, but don’t forget that Liverpool picked up an FA Cup in 1992 and a League Cup in 1995, so there are some parallels. Right now it feels as though we’re ideally placed to push on under Jürgen Klopp and finally get ourselves back to the top end of the table. Man United, meanwhile, are in a bit of an odd situation. You can’t argue that José Mourinho’s method wins things, but if trophies don’t come then it’s difficult to go along with the idea of the ends justifying the means. This match felt like it wasn’t just a clash of rivalries but of footballing philosophies. What were the major talking points?

At the start of the season, most sensible Liverpool supporters would’ve bitten your hand off for a quarter-final appearance in the Champions League combined with a top four finish. A piece of silverware would’ve great, but Arsenal have shown over the last couple of years that trophies aren’t everything. The idea that the majority of fans are now looking at the European Cup as a genuine possibility speaks volumes for how much we’ve progressed under Jürgen Klopp. Not only are we winning matches but we’re doing so whilst playing really brilliant football, which has always been the dream. We went into today’s game believing that a second-place finish was also entirely achievable and I’ve been saying for ages that it shouldn’t be underestimated if we manage to do it.

Incredibly crucial game for United hosting arguably the most dangerous Liverpool side for years. Time for each team to prove themselves worthy of being crowned 2nd best. It may be a cracker.

I know I run the risk of repeating myself, but Liverpool have finished second just three times in the Premier League era. All three times we’ve done so the following season has seen the wheels come off almost entirely. There’s been a drop off of around twenty points on each occasion, but this time feels different. This time it feels as though finishing second would be springboard to something; a chance to prove that we really are the second-best team in the country and the one best positioned to take the fight to Manchester City next term. That’s why today’s game felt so important, even if the result of it may not actually have a genuine impact on which team finishes in the runner’s-up spot. 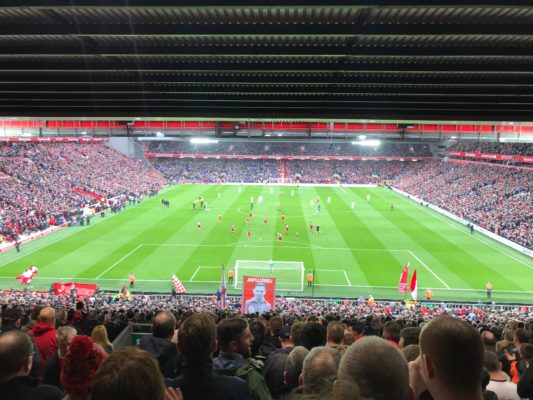 The way that the two team’s matches have fallen meant that it did feel like Liverpool could ‘go for it’ a little bit more than the home side. Having strolled past Porto in the last sixteen of the Champions League, we’ve got a week to recover before hosting Watford on the seventeenth. United, meanwhile, have just two days rest before Sevilla arrive for the second-leg of their European game. The 0-0 draw in Portugal means they’re favourites to progress, but they’ll certainly be needing to put more into the match than we did last week. If the Red Devils end up pipping us to the post and snatched second spot in the Premier League then it will be a nice thing for them, but progress in Europe surely matters more. Given the fact that they’re still in the FA Cup, they have three competitions still to worry about compared to our two.

Bailly is back. This is a huge fucking step for United. Bring on Sevilla. 🔥🔥

The loss means that we’re now in the weird position of wanting Manchester United to go quite far in both the FA Cup and Champions League. Obviously we don’t want them to win either of them, but the further they go the more likely it is that their squad will tire as the last few games of the season roll around. Their win may well strengthen their belief, but the losses they’ve suffered to the likes of Newcastle show that they’re still vulnerable at times. The other thing to remember, of course, is that finishing third or even fourth won’t be disastrous. The most important thing is to maintain our position in the Champions League and I think we’ve got the ability to do just that. Still, there’s no question that today’s result is something of a setback.

It Was Still Right To Start Alexander-Arnold

It’s unfair to pin both of the first-half goals on Trent Alexander-Arnold, with question marks over the goalkeeper for the opener being entirely fair. Yet the youngster was ruthlessly exposed by Marcus Rashford for both goals, showing his naivety in the way that he sold himself short on both occasions. I’m in no doubt whatsoever that the youngster is going to be a brilliant player for us in the long-term, but it’s unfortunate that he has to go through this period of growth first. We’re having to watch him make mistakes like he did today in big matches, but he’ll be learning from everyone of them.

Trent Alexander has really struggled today, I rate him but he’s looked like a boy playing his first game in men’s football today. He needs to start defending a lot better, playing full back has a lot more to it than just charging forward ⚽⚽

It should also be pointed out that starting him was the right thing to do. Yes, the manager favoured Joe Gomez in previous big matches earlier in the season and may well have done so today if the former Charlton man hadn’t been out injured for the last month or so. He has been injured, however, and looked rusty during the match against Porto last week. This was never going to be the sort of game that he would be thrown back into, especially given the fact that his fellow right-back has actually been playing really well in the last couple of matches. That said, Rashford unquestionably got the better of Trent time and again in the first forty-five minutes.

Our attack is one of the best in the league, if not in Europe as a whole. The way all three of Roberto Firmino, Sadio Mané and Mohamed Salah work together is genuinely electric at times. We can move the ball around intelligently, probe defences and ask questions of them time and time again. So why oh why did we repeatedly decide to smash shots in from distance against a Manchester United team with David de Gea in goal? The only shot-stopper in world football that can rival him for the title of being the very best right now is Manuel Neuer and even that isn’t a mortal lock. He would have been praying for this Liverpool team to take pot-shots from twenty-five yards, delighted to see us do just that. The lack of intelligence at times is immensely frustrating. Fourteen attempts with only two on target tells you pretty much all of the story.

It wasn’t just the attackers being stupid, either. The midfielders were taking idiotic shots and, perhaps even worse, putting crosses into a box filled with groks who were begging for us to do exactly that. Things didn’t improve with United’s substitutions either, given that Marouane Fellaini will happily head balls away all day long. Perhaps it’s just the frustration at losing, but I was so annoyed with our decision making in the second-half. You have to give United’s defence credit, of course, but they were aided and assisted by a Liverpool side that simply didn’t think about the decisions it was making. I do wonder whether those that constantly criticise Jordan Henderson will look at today and realise exactly what it is that he brings to the team. It’s unlikely, of course.

I know I’m biased and will always say this, but I genuinely do think that we’re better placed moving than Manchester United under José Mourinho. His style of football is able to grind out results and he wins things, but will this side truly be able to race into a points lead similarly to that that Manchester City have built up this season? They don’t seem to have a style of play that you can point to and say ‘that’s a United goal’. They may well get that over the next few weeks and months, but even now, after nearly two seasons in charge, I’m not sure what type of team Mourinho’s trying to build or how the players fit into his system. Alexis Sanchez, for example, seems more like a purchase because he was available rather than one the manager’s got a plan for.

When it comes to Liverpool, however, you feel as though every single signing is made with a purpose. Every player that we’re linked with, you know where they’re going to fit into Jürgen Klopp’s side. That’s why I honestly believe that Manchester United might have won the sprint today, but Liverpool will win the longer race. Both the manager and his players seem to be learning every single time something happens or a result doesn’t go their way. They will bounce back from this and learn from it. If we were to draw Manchester United in the quarter-finals of the Champions League, for example, I think we’ll get the better of them. I might be proven wrong, of course. Yet somehow I’m not as upset about today’s result as I might have been in previous seasons. We’re still very nicely positioned to push on in a big way.