This match had ‘banana skin’ written all over it. Stoke hadn’t scored a goal in open play for weeks before kick-off. They hadn’t won a game against any member of the top ten since December 2015. They’d also been in a poor run of form lately, managing just one win in their previous five and losing their last three. If Liverpool were any other side in the top five then you’d have them down for a nailed on win. But Liverpool aren’t any other side in the top five. That’s why, despite the opponents we’ve got left to play, our top four finish is anything but guaranteed.

That should fill us with confidence, except it doesn’t.

Under Arsene Wenger, Arsenal have become something of a top four machine. They simply know what they need to do to get into those Champions League places and they may well still do it; they’ve got three games in hand on us and if they win them we’ll be level on points. One of the things that Wenger’s team has been able to do so well over the years is pick up the three point against teams who aren’t as good as them. That was why it was absolutely crucial that we win today and get over a few mental blocks that have been dragging us down. So what are the major talking points from our 2-1 win?

In my pre-match betting piece ahead of the game I talked about how important narrative is to football. The narrative of former players coming back to haunt you, for example. For Liverpool at the moment there are also sorts of narratives that have been hanging like an albatross around our necks and that could have been given more fuel if today’s result had gone how it was looking to go for a time.

Before kick-off, we hadn’t won a game without Mané. We also ‘struggle against the lower teams’. Another favourite of some pundits and supporters is that our team is mentally weak. The easy joke to make is that Liverpool are the Robin Hood of the Premier League, taking points from the top to give to the bottom. Our home draw against Bournemouth did little to dispel any of these narratives, even if we deserved to win the game quite comfortably on the balance of play. Our defensive frailties reared their ugly heads once more in the week and a bottom ten side benefitted, as though so often appear to have done.

Today’s three points weren’t just crucial for our top four ambitions, but also to be able to put some of these narratives to bed. In a way, the manner of our victory was almost as important as the victory itself. If we’d merely strolled to a 2-0 win it would have been refreshingly different, yet it also wouldn’t have given the players the confidence to know that they can dig deep when they need to. On their day Stoke are a side who can cause a team like ours all sorts of problems. They have fast, tricky lads such as Xhakiri, as well as big tall groks all over the pitch. We could very easily have collapsed mentally when we went 1-0 down and the team deserves a lot of credit for its mental fortitude when we didn’t.

18 – Liverpool have won more points from losing positions than any other Premier League team this season (18). Recovery.

Yet is the idea that this is a mentally weak squad fair? We have won more points from a losing position than any other team. Six times so far this season we’ve been losing, only to come back and win the game. That doesn’t suggest mental weakness, it suggests a strength and belief that not all sides possess. It is crucial that the starting XI shake off this idea that they’re perennial losers when the going gets tough, for the stats do not reflect that as true. Likewise we need to do so as supporters. Which brings me neatly to my next point…

Our Supporters Need To Have More Belief

There’s been a strange changing of the wind in recent years. It used to be that Liverpool fans would believe in the impossible. We were mocked by supporters of other clubs for believing that ‘this would be our year’, yet that same belief has seen us achieve things that other sides could only dream of. Would we have been able to come back from 3-0 down against AC Milan in a European Cup final and go on to win it if the players and the supporters didn’t have a shared belief? What about coming back from 3-1 down against Borussia Dortmund?

The worst thing about all this is that I literally know LFC have lost. Not even reverse pyshcology.

Perhaps it’s because people are afraid of stating a firm belief, only to be made fools of later on if it doesn’t pan out. Even now, as I type, I’m having a WhatsApp argument with a Liverpool supporting friend of mine because I sent through a photo of the Grand National winners with Manchester United in sixth. “Bit early to be crowing about sixth place”, they said. Perhaps we will collapse and surrender our top four spot. Maybe we will be so poor in our final six games that United sneak above us. But isn’t winding up United supporting mates of ours exactly what it’s all about? 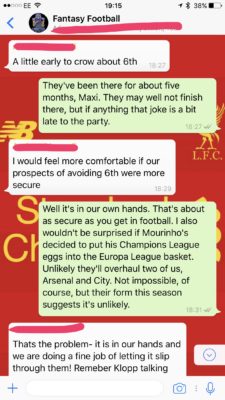 I’m also a little bit tired of people forgetting that football matches last for 90 minutes. Some of the tweets I saw at half-time were a little bit cringeworthy. Slating the manager for his starting XI and the players for their performance. Convinced that we’d lose because that’s what we do. Panicking about the remaining fixtures we have before the game we were playing was even over. I’d be the first to admit that I’ve lost my cool at full-time on more than a few occasions. I try to wait until the end of the ninety minutes, though, because I’ve seen this Liverpool team achieve far more difficult things than coming back from 1-0 down against Stoke.

Remember when everyone, me included, thought our run-in was full of easy, winnable games that would power our title challenge?

I also think it’s worth pointing out that we weren’t actually that bad in the first-half. No we didn’t play with the same free-flowing football that have made us irresistible at times this season, but we grew into it as the half wore on and if Wirral-born Mike Dean hadn’t been desperate to prove that he doesn’t favour Liverpool and had given us a stonewall penalty, then we go in at the break 1-0 up not 1-0 down. Football is very rarely as black and white as we all want to make it, with few performances actually “dreadful”, “disgraceful” or “a joke”. If I could ask one thing of our fanbase it would be to have a little more faith in the team and a little more willingness to wait until the end of the game before throwing toys out of prams.

Credit Where It’s Due: Mignolet Was A Match Winner

Anyone who has ever read anything of mine will know that I’m not a fan of Simon Mignolet. I will not be even remotely heart-broken if we decide to sell him this summer. In fact, I think it’s vital to the progression of the team that we do. Yet I am not so blind to his abilities that I refuse to give him credit where it’s due. The Belgian produced two sublime saves today that as good as won us the football match. The first came when we were already 1-0 down and the other when we’d reversed the score to be 2-1 ahead. Both were equally as important and equally as impressive.

For the record, my problem with Mignolet has never been that he’s not good at the shot-stopping side of his game. I would argue, were you to press me on the issue, that he’s not necessarily that much better at it than most decent goalkeepers, but that’s wandering off topic. He can and has produced some tremendous performances when it comes to the ‘saving things’ side of his game. My issue with him is that he puts doubt and uncertainty into his teammates and is too often bang-average at the other parts of his game, such as distribution. Even today, for example, after he had made a brilliant save, he kicked the ball straight out for a Stoke throw-in under no pressure whatsoever.

Everyone is quick to criticise Liverpool’s defence, with some asking whether it’s improved at all under Jürgen Klopp’s guidance from the days of Brendan Rodgers. That’s a totally fair question, but what I would say is that Simon Mignolet, Dejan Lovren and Nathaniel Clyne were all present in the defence across both managers. It is not unreasonable to suggest that the personnel at the back might be a big part of the problem. That is why I think we need to upgrade on Mignolet in the summer and it’s why I believe it’s a crucial part of any improvement we’re likely to make to our defence. Is Karius the answer? I don’t know, but those who watch the Bundesliga say his reaction saves are one of his strengths. If that’s the case then we’re not going to lose the one strength in Mignolet’s game by having him as our number one next season.

What a save again from Mignolet. Incredible

Having said all of that, today the man deserves all the plaudits he is getting. His saves were absolutely top-drawer and we would unquestionably have lost the game without them. When a goalkeeper is able to produce saves like that it is as good as a striker scoring a worldie. We are fortunate that today we had both. It has been said of Liverpool that since we last won the league the one thing we haven’t been is deadly in both boxes. Between Mignolet at one end and Roberto Firmino at the other, today is one day where we were simply better than the opposition in the two places where it mattered the most.