Some believe that the international break came at exactly the right time, given our reported ‘slump’ before the players went away to their national sides. It felt like players, management and fans all needed a bit of a break, a chance to get away from each other and try to get their heads together. Whether that’s true or not, the supporters were certainly starting to buy the narrative in the press that we’ve had a poor start to the season. Rather than looking at one loss in the league and unbeaten in Europe, fans have been concentrating on one win in seven and the League Cup loss. There’s even been a sense that Jürgen Klopp’s job is under pressure, which strikes me as an absolute nonsense.

Jurgen Klopp – flop or not?

Fans and experts give their verdict

Ahead of this fixture, Jack Lusby on Twitter Tweeted about how the Reds have won just 35% of the early kick-offs taking place before 1.30pm under Klopp and how only one of those wins has come at Anfield. Andrew Beasley, meanwhile, pointed out that Liverpool have lost three out of three against Manchester United with Martin Atkinson in charge. The stats, then, were very much against us heading into this one. It was a genuinely difficult match to call ahead of kick-off, owing partially to the form of both teams and partially to the confidence of the players. Would United come out all guns blazing, looking to put our mentally weak defence under pressure? Or would we continue the sterile domination we’ve demonstrated lately?

Consider this. Since Alex Ferguson retired as Manchester United manager, the club has spent well over half a billion pounds on players. José Mourinho himself spent £75 million on Romelu Lukaku alone, so it’s fair to say that you might expect them to turn up at Anfield and show a little bit of ambition. Mourinho would no doubt say that playing defensive is a fair tactic and, to some extent, he’d be right. Teams are entitled to play however the manager elects, but when you’re chasing a title and in charge of a team like United it’s bizarre to set out for a 0-0 draw from the first minute. In fact, it was after just 47 seconds that the Red Devils began time-wasting. Standing on the Kop, so far this season I’ve seen Burnley show up and play more excited football and Crystal Palace display more attacking intent than our arch rivals did today.

Klopp on #MUFC tactics: “For sure you could not play this way at #LFC but it’s OK for Manchester United.”

When United showed up at Anfield in the equivalent fixture last season, Mourinho’s tactics were understandable. Liverpool were on fire and his team were struggling to get their season started, so his decision to put eleven men behind the ball and strangle the life out of the game made some sort of sense. This time around, however, the decision was a bizarre one. United are the team in form, scoring at will and racking up the points in order to keep their neighbours under pressure. The Reds, on the other hand, have been defensively poor for some time and giving away chances when put under a modicum of pressure. Weird, therefore, to come under no pressure whatsoever over the entire ninety minutes. There was no turning of the screw, no period in which we on the ropes; just us attacking and United defending deep. 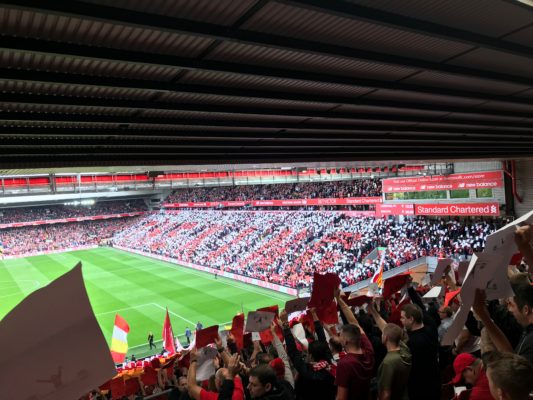 It’s a tactic that’s paid off for José Mourinho in years gone by, of course, but the state of the Premier League has changed from when he was able to do it as Chelsea manager. The self-proclaimed ‘Special One’ has long enjoyed stifling matches against top four rivals, yet the problem he’s got now is that there are six team vying for four positions. Will he really head into ten games against the other five teams hoping for a draw? That’s ten points from a possible thirty and, with Manchester City also steam-rolling the ‘poorer’ teams in the league you imagine that the top six mini-league will decide the final destination of the Premier League trophy. If he gets his team playing as negatively as that against Chelsea, City, Arsenal, Spurs and us in the remaining games then I don’t see it going to Old Trafford.

One goal in six away league games against the big six for Manchester United under Jose Mourinho.

The weird thing is that Man United fans don’t seem to mind today’s performance. Personally I thought it was embarrassing for a team of their stature to turn up at Anfield and make absolutely no effort to win. For the first time all season, I wasn’t concerned about the goalkeeper or worried about our defence. The question was only about whether or not we could score rather than whether we would concede and I couldn’t believe the shape United adopted when we were on the ball. If Mourinho was hoping that they’d be able to hit us on the counter-attack then he might well have thought about actually taking the reigns off his players. If you think I’m being unfair, consider this: Simon Mignolet had more touches than Lukaku. No ambition, no desire to win.

It’s not all about United playing poorly, though, and the Reds deserve plenty of credit for dominating a match against a side that the table suggests is seven points better than us. Mourinho might have tried to use his press conference to suggest that Liverpool were just as defensive as United, but that’s more fake news than we’ve seen come out of the White House in recent times. We have been accused of numerous things so far this season, including a weak mentality and an inability to create chances against deep-lying teams. You don’t get much more deep-lying than we saw today, yet still we could easily have won it. That man David de Gea had yet another excellent game in goal, always in the right place at the right time and denying us a certain goal in the first-half.

Obviously annoying we haven’t won but in many ways that was a very accomplished performance. Miles better than United in every department.

Our midfield three, which has come under some criticism at times so far this campaign, were significantly better than their counterparts. Gini Wijnaldum looked great in the warm-up and he continued that during the game, perhaps responding to criticism that he ‘goes missing’ too often. Jordan Henderson did what Jordan Henderson does, turning the ball over quickly and looking to probe when possible. Emre Can was, not for the first time this season, the poorest of our midfielders but even he had some decent moments. Given that they were playing against an eleven man defence, I thought all of three of them did what we needed them to do in the way that they both protected the defence and assisted the attack. Speaking of the defence, Romelu Lukaku once again posed us absolutely no issues. He hasn’t put in a good performance at Anfield since he arrived wearing a West Brom shirt and, as far as I’m concerned, long may that continue. He forced a save from Simon Mignolet in the first-half but it never truly tested his Belgian teammate and other than that he was kept quiet by Dejan Lovren and Joel Matip. He was also remarkably fortunate to remain on the pitch after smashing Joe Gomez’s legs away on the touchline and then deliberately kicking Lovren in the head when he was down on the ground. Martin Atkinson matched his fellow referees in doing us no favours with how he officiated the game, with Lukaku allowed to stay on and Henrikh Mkhitaryan tripping Coutinho in the box without punishment.

Lukaku could slide tackle Martin Atkinson’s mum and he’d just have a word.

I’m sick of talking about referees, though, so I’m not going to get bogged down with how Ashley Young was given more second chances than an invincible cat. Instead I’m going to talk about how Coutinho was the best player on the park by some distance and the fact that Mohamed Salah looked like a genuine threat ever time we attacked. Many people felt that a win could have sparked our season but I think the draw may do, given the nature of the performance. We answered some critics and outplayed a United side that is an undoubted title contender, putting ourself in a position where only one team was likely to win all three points. If we can beat Spurs at Wembley next week then we’ll have four points from a possible six against our top four rivals and that’s nothing to be sniffed at.

Things Are Better Than People Think

Some Liverpool fans are, weirdly, desperate to believe the media narrative that we’ve not been playing well this season. The reality is that we’ve been playing really well at times but have been found wanting when it comes to the moments of fine margins. We really genuinely could have won all of our games with the exception of the loss to Manchester City, but even that might have turned out differently if the referee had adjudged Sadio Mané’s high foot in the same manner that several of his colleagues have judged identical situations since. It’s not an excuse, but we’ve been unlucky at times and wasteful at others.

Mourinho will be happy with the point but won’t be happy about the performance I’d imagine. Liverpool were able to play through Man Utd quite easily and surprisingly often. Also very little counter-attacking threat.

Today we went toe-to-toe with a Manchester United side that’s seen as one of the title contenders and were better than them all over the pitch. That, for me, is proof that this Liverpool team is better than the results it’s been getting so far this campaign. Thankfully Jürgen Klopp is not as reactive as either the media or our supporters, so I imagine he’ll tell his players to keep going in the same manner and be confident that the results will shift in their favour. January is likely to be a decisive month as it was last year, but this time we’ll have players with fresher legs and a squad that’s capable enough to cop with the demand placed upon it. Keep within touching distance and you just never know what will happen.