Home
>
Analysis
>
Some Talking Points From The Past Week

There’s been something that’s been annoying me lately. It’s a mood that seems to have taken over a huge swathe of football fans and it’s starting to wind me up. Lots and lots of people seem to think that they need to be constantly angry about football and footballers. There have been two things recently that have drawn my attention to this, which I’ll discuss in more detail during the piece. It’s such a strange way of thinking that I’m not entirely sure I can get my head around it. For a while I assumed it was just an online phenomenon, brought about by the proliferation of social media platforms such as Twitter and Instagram. Then I had a run-in with someone on the Kop and it made me realise that lots of people are taking it into the ground with them. I’m genuinely amaze that so many people seem to think that you’re not allowed to enjoy football or like footballers. If you do suggest enjoying it then be prepared to be mocked by rival club supporters, too.

John Aldridge: “Some of the City players will shake when they feel the atmosphere Liverpool create. They won’t have heard anything quite like it.”

They literally played at Anfield two months ago, John. Get a grip.

The idea of enjoying football or feeling positive about your club seems to have become something that should be laughed at, as though the very notion of thinking that your club might do well is too ridiculous to contemplate. From the outside world it’s ludicrous for you to say that your club has a good atmosphere, whilst from within your own supporter-base there’s a chance that you’ll be mocked if you think that players won’t be sold in the summer if they’ve played well during the season. As for the lads that actually take to the pitch, if you don’t buy into the narrative that surrounds one or more of them then you’ll appear to be out of step with most other supporters. Such is the rush to form immediate judgements nowadays that people feel as though they’ll be caught out and made to look silly if they back down. It’s like when pundits say on TV that a tackle is ‘never a penalty’ and then can’t change their mind even when you see a replay and the offending player has scythed down the opposition recklessly. Here, then, I’ll explain why I think it really is ok to like football.

I Think Anfield’s European Atmosphere Is Worth Celebrating

Football as a whole has become somewhat sanitised over the past decade or so. The introduction of the Premier League saw the game become far more about commercialisation than anything else. Suddenly partnerships with companies such as Dunkin’ Donuts and BetVictor get press releases and media coverage that would have been previously reserved for a top-signing. I don’t care about that, to be honest. Whether we like it or not, growing commercial revenue has become crucial for a club wanting to compete at the top end of the table. The only reason that the entire enterprise gets on my nerves is that clubs like Liverpool make a point of using the atmosphere at their ground to sell these commercial deals to the companies that make them at the same time that they price out the people that create the atmosphere in the first place.

New low today, someone got kicked out of the kop because he was standing up and most likely singing horrible grasses

Let’s be honest, the atmosphere at most grounds around the country is significantly poorer than it was twenty years or so ago. There’s no doubt that turning the top-tier clubs all-seater has had an impact on that. Most league games are seen out with a minimum of excitement on the stands, save for the few that actually have some meaning attached to them. When Liverpool played Manchester City recently, the atmosphere was actually pretty good. That was especially evident in the second-half, when Liverpool’s goals spurred the Kop on to roar them home. Even then, though, it wasn’t as electric as I’ve experienced it in the past. That’s something that Manchester City supporters seem to have seized upon since we were drawn to play against them in the Champions League. The entire fanbase seems to find the idea that the Anfield atmosphere might somehow have an influence on the result of the match. 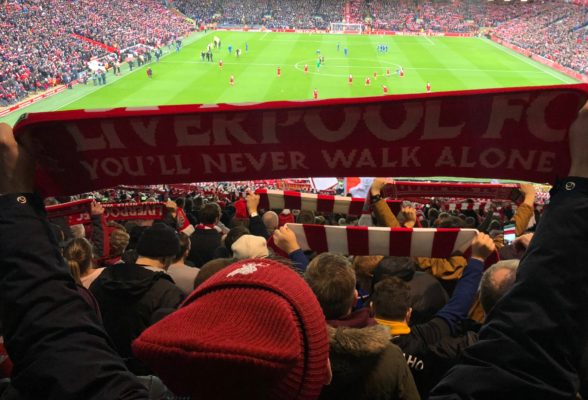 Yet there’s something different about Anfield on a European night. It’s electric. I’ve seen incredibly experienced teams and players wilt before my very eyes thanks to the noise made by our supporters when the floodlights are on and there’s a place in the semi-final of the European Cup at stake. If you don’t believe me then go back and watch the highlights of the game against Juventus in 2005. Players that have played in cauldrons were kicking the ball straight out of play and had no idea what had hit them. The same was true of Chelsea in the following match, leading to the club captain John Terry saying, “The Champions League game in 2005 is probably the best atmosphere I’ve ever played in”. An opinion echoed by the Borussia Dortmund players in the Europa League in 2016.

I understand the fear of having the second-leg away and they humiliated us there in the league, but worth bearing in mind that it’s not exactly a stadium with a terrifyingly partisan home crowd. Usually half empty isn’t it?

There’s no guarantee that we’ll beat Manchester City in the home leg, of course. We played two Champions League campaigns in 2010 and 2015 when we failed to qualify from weak groups, with the atmosphere making no difference. Yet there can be no doubt that it’s different in one-off games when there’s something at stake. I tweeted something suggesting that the Etihad isn’t known for its partisan atmosphere, in what I thought was a clearly tongue-in-cheek tone. As a result I had replies for literally four days from City fans desperate to tell me I was wrong and that Liverpool supporters’ faith in our ground’s atmosphere was misplaced. Essentially, they found ir hilarious that we thought we could beat them and create a good atmosphere at Anfield on the way to doing so. Any show of faith in a side that has scored seventy-three goals and reached the quarter-finals of the competition in the first place have been mocked. Why is it not ok to believe in your team’s ability to win?

Perhaps it’s the same reason why some people think it’s pathetic to like Jordan Henderson. In my adult life, I’ve never known a player to be as divisive as the current Liverpool captain. I’ve made it perfectly clear in my blog pieces on here that I really rate the former Sunderland man, yet that doesn’t mean I think he’s the best player in the world. I understand that he’s got limitations, but I think he’s a very, very good footballer who is crucial to the way we set a tempo in matches. When I tweet praise of him I normally get a reply informing me that ‘he’s not good enough’ and that the club can ‘upgrade on him’. There are very few players in the team that I don’t think that’s the case over. Why is it that Henderson is singled out for that particular criticism? Can Gini Wijnaldum not be improved upon? What about James Milner? Tweet praise of either of them and it’s unlikely you’ll be told we ‘can improve’ upon them as players, in spite of the fact that we obviously can.

One dimensional, plays safe sideway passes, slow to react and gives possession away all the damn time.

I often thought that the hate for Henderson was just a weird online thing, but there’s a bloke behind me on the Kop that made me realise that that isn’t the case. Against Watford he spent the entire first-half sarcastically applauding the captain every time he touched the ball. I’d be the first to admit that he had a dodgy ten minutes midway through the first period, but the way this fella was acting you’d think he’d scored a hat-trick of own goals. It was nothing but abuse, screamed loudly from the Kop to the point that in the end I had to turn around and ask him what good he thought he was doing abusing the captain. He had no response apart from to tell me that he’s rubbish, in slightly less flattering terms. It’d absolutely bonkers. I really can’t understand the need to shout abuse at the captain of your own club. What’s he hoping he’ll achieve? Even if you don’t like him, just shut up. It’s ok to keep your negative opinions to yourself.

I can understand why those that don’t like Fenway Sports Group might feel as though they’re turning us into a selling club. The simple reality is that over the past four years we’ve had to watch as Luis Suarez, Raheem Sterling and Philippe Coutinho have left for huge amounts of money. Now those that like to assume the worst in football have decided that we’re going to do the same thing with Mo Salah in the summer, given the exceptional season that the forward has been having. Yet I’m not so sure that those people are right. I’m more than aware that it can appear to be making excuses, but I think the sale of all three of the players I’ve mentioned above made some sort of logical sense. I think, for example, that Luis Suarez was persuaded to stay for the 2013-2014 season with a promise that he’d be allowed to leave the following summer. I think we’d have had a player that would’ve downed tools if we’d gone back on that promise.

One thing that really annoys me about Liverpool is that we’ll sell most players for the right price. You don’t see De Bruyne linked with the elite clubs because there’s no way City would sell, but because we’re Liverpool everybody’s interested in Salah.

Sterling’s agent made it virtually impossible for him to carry on at the club, whilst Coutinho made it clear that he’d already moved on in his head. Both of them spent a good fews years at the club, with the Brazilian having played for us for five years. He felt it was time to move on and Jürgen Klopp, who I don’t think every truly felt he was his sort of player, saw a chance to cash in and improve his squad in the process. With Salah I think it’s different. He’s only been here for one season and we’re a project that’s only going to be getting better with each passing year. He’ll be looking at this team and believing that he can win the highest honours with us, so he won’t want to force a move and the club will have no reason to sell him. The ‘I told you so’ brigade are getting their attacks on FSG in already just in case, but I would be genuinely shocked if we sold him any time soon. The best way to keep him is to win stuff, which I think we’ll be doing sooner rather than later.