I’m not a proud man. Unlike many people who refuse to admit that they’ve got something wrong, I have no problem holding my hands up and admitting that I’ve made a bad call when I have indeed done exactly that. I thought that Mario Balotelli was going to be a good signing for Liverpool, for example. I also understood why the board decided to stick with Brendan Rodgers in the summer of 2015 when everyone else was calling for his head. I don’t think I need to write a confessional autobiography for every to know that I got both of those calls one hundred percent wrong. There are many things that I’ll never understand, but the desperate desire of some to remain wedded to an opinion that is so obviously wrong just in case they look a bit silly is one that I’ll never be able to get my head around.

You lot can’t swindle me. Trying to squeeze Gerrard in the prems greatest midfielder debate!! Gerrard can’t even talk to James Milner. I’m being serious. Please

Obviously Twitter isn’t exactly the home of the sane and rational, but let’s not pretend that we haven’t all said something daft on social media at some point or another and had to decide whether to stick to our guns or back down eventually. Jordan Henderson is selected to play by every manager who has ever worked with him, is regularly praised by teammates and is a European Cup winning captain of Liverpool Football Club, yet there are still plenty of people resolutely married to the idea that he’s rubbish. That takes impressive commitment and, frankly, something I simply don’t have the time or inclination to try to carry out myself. Which brings up neatly around to James Milner. The former Leeds and Aston Villa man is someone that I’ve often been critical of, but admit that it might well be time to admit my mistake.

That’s not to suggest that I think he’s perfect, of course. I’m a huge fan of the aforementioned Henderson, but that doesn’t mean that I can’t see any of his faults. In fairness, I think Jürgen Klopp is the best manager the Reds have had during my lifetime but he’d admit himself that he’s not perfect. When it comes to Milner, I still don’t think that the Liverpool team is at its dynamic and free-flowing best when the midfielder is selected to be in the side. I also wince if I see him coming off the bench in a high-tempo match, forever having flashbacks to our 4-3 win over Manchester City at the start of 2018, which was was 4-1 before he came on and ended up 4-3 because he seemed to be able to get nowhere near the pace of the game.

It’s those games in which we need to combine pace and control that I feel Milner struggles in the most, which is hardly that surprising for a thirty-three-year-old who has more miles on his clock than a Boeing 747. Klopp’s Liverpool team is at its most exciting when it’s shutting down the opposition relentlessly, shifting the ball from one end of the pitch to the other in a flash and harrying defenders into making mistakes. Whilst Milner can do that against the right opposition, it’s not something I think he’s likely to offer against Pep Guardiola’s Manchester City or even Frank Lampard’s youth-filled Chelsea team. I admit, though, that I have based many of my thoughts on Milner on just a handful of times that he’s looked off the pace of the game.

He Offers So Much

The above doesn’t read like an overly convincing apology, to be fair. The point of writing all of that, though, is to show that opinions can be nuanced. I’d have no problem if the people that constantly criticise Jordan Henderson or Dejan Lovren would be willing to acknowledge their good qualities, but they only seem to be willing to emphasise the perceived negatives of the players and that’s not useful. As much as I feel that Milner can look a little out of place in matches that are played at a high pace, therefore, it’s still important to acknowledge exactly what he does offer to Jürgen Klopp’s team. Aside from his obvious flexibility, given his ability to play left-back, right-back and pretty much anywhere else you might want him to, he’s also a calm head when others seem to be losing theirs.

Nowhere is that more evident than in his penalty taking ability. My heart was pounding through my chest during the final moments of our game against Leicester City and I was just watching the match, not playing in it. Goodness knows how he had the mentality to be able to stand towering over the ball and wait, calmly, for his moment to strike it past the diving Kasper Schmeichel. He had spent the ninety minutes prior to that point charging around the pitch, smashing into players and trying his hardest to stamp some sense of authority onto the match, so there’s no way he wasn’t knackered. Yet he didn’t let it show, instead offering everyone from the players down to the crowd a sense of calmness and certainty that the moment he picked up the ball the match was won. 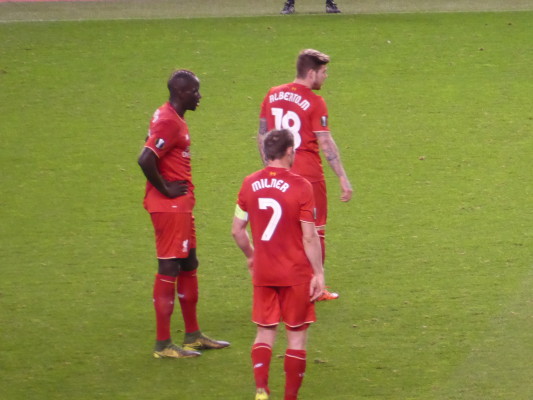 So yes, I admit that I have been harsh on Milner at times. When people have mentioned in the past that they hope his contract gets extended I’ve rolled my eyes and wondered how many other thirty-plus-year-olds people would want to see running round a park every week. Milner isn’t like other thirty-plus-year-olds, though. He’s a model professional, someone that the rest of the squad will be learning from every day of the week. I confess that the older he gets the more hopeful I am that he’ll remain at Anfield as a member of the backroom staff rather than a first-choice midfielder, but I very much do hope that now. He can offer so much to everyone, teaching them things all the time – not least of all me.

There’s no shame in admitting you’re wrong from time-to-time. Whilst my ‘wrongness’ is somewhat tempered by the fact that it’s not overwhelmingly the case, I have no problem whatsoever admitting that James Milner deserves far more credit than I’ve some times given him.